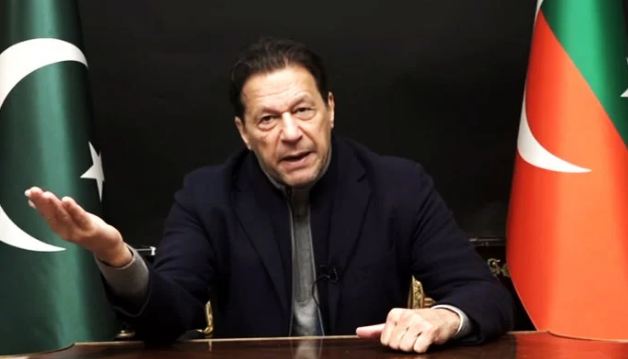 • We must stand up to save Pakistan’s drift towards point of no return: Khan

ISLAMABAD: Pakistan Tehreek-e-Insaf (PTI) Chairman Imran Khan and the party leadership strongly condemned the unlawful detention of the PTI Senior Vice President Fawad Chaudhry in the wee hours of Wednesday in Lahore, demanding his immediate release to save Pakistan’s drift towards a point of no return.

The PTI leaders stated that the arrest of Fawad without warrant clearly showed that Pakistan became a banana republic and the rising fascist tendencies would further push the country towards anarchy.

Condemning the arrest of Fawad, PTI Chairman said: “Fawad’s arrest on his apt description of the CEC leaves no doubt in anyone’s mind that Pakistan has become a banana republic devoid of rule of law.”

“We must stand up for our fundamental rights now to save Pak’s drift towards a point of no return,” he added.

In his reaction, PTI Vice Chairman Shah Mehmood Qureshi said that Fawad’s arrest without warrant was a strong slap on the face of democracy and supremacy of the rule of law of this country.

He raised question as what was Fawad’s fault and what crime he committed that he was taken into custody. Qureshi stressed the need to stop playing with Pakistan, or else the situation would not be anyone’s control.

Similarly, in his strong reaction, PTI Senior Secretary General Asad Umar said that the truth was bitter and Fawad spoke the truth, which was the sole reason of his detention. Asad said that Fawad was innocent and he must be released forthwith.

“You must respond to his argument in the same manner rather than using force,” he added. He said the government’s move would rebound on it while the PTI would be the ultimate beneficiary.

“All workers should reach Zaman Park, as I have already there,” he urged the party supporters.

Omer Ayub Khan PTI Additional General Secretary reacted: “Today 3 countries of the world are put in the same bracket – North Korea, Myanmar and Pakistan. All due to the untiring efforts of this Imported government. He said that forced abductions, false charges and arrests, zero freedom of speech, zero rule of law were the common factors amongst all three countries.

PTI senior leader Asad Qaiser strongly condemned the arrest of Fawad Chaudhary, which, he said, that was a clear reflection of politics of intolerance, as Mohsin Naqvi gave the first proof of loyalty to please his masters. He said that the imported government and its facilitators wanted to worsen the situation, which would have dire consequences.

Asad Qaiser stated that they were mistaken if they thought that the PTI leaders would be terrified through detentions and intimidations.

He vowed that they would continue their struggle within the ambit of constitution and law. However, Asad Qaiser warned that if an attempt was made to arrest Imran Khan, public would react strongly across the country for which the federal government and the interim government would be held accountable for political chaos and economic instability in the country.

Strongly condemning the arrest, Hammad Azhar PTI General Secretary Central Punjab said that Fawad was being transported to Islamabad via the motorway “in clear defiance of the high court’s orders”.

He said that that police officers pointed their rifles at him and threatened to back off when he, along with party leaders, were following the motorcade of the law enforcers.

Hammad stated that the fascism of the regime was directly proportional to its economic blunders. The more they mess up, the greater was their need to silence dissent, he added.

He went on to say that LHC judge issues written order to produce Fawad before him from ‘wherever he is’; however police drove Fawad in a direction away from LHC, adding that police was driving Fawad in circles but not bringing him to LHC as per the judge’s orders.

Hammad recalled that the fact was that Fawad reminded the Election Commission members of their duty of impartiality. “He also stated that what punishment is prescribed in the law in case of partiality and violation of the constitution,” Hammad added.

He said that it was strange that the ECP would keep on continuing making controversial decisions but no one even could criticize the decisions.

Farrukh said that police were taking Fawad to Islamabad in sheer violation of LHC’s orders. “I stopped police at Kala Shah Kaka only try to remind them about LHC orders but they forcefully taken him to Islamabad, indicating that they were obeying orders of some one more power full then courts,” he added.

He said that the law enforcers shot at him.

In his reaction, Ali Haider Zaidi said that he strongly condemned the arrest of the senior party leader and said the government was hell-bent on pushing this country towards anarchy. He said that Pakistan has become a lawless state at the hands of these lawbreaking lawmakers and corrupt law enforcement officers.

PTI Senator Shibli Faraz reacted that the arrest of Fawad Chaudhry was proof of the cowardice of this government.

PTI Senior leader Imran Ismail said that there was not one, but a hundred thousand Fawad Chaudhry in PTI. He said that now the days of the failed government were numbered. “We cannot be silenced through such brutal tactics,” he added.

PTI Senator Shaukat Tarin, in his reaction, stated: “All, Fawad has been asking the State Organs is to fulfill its constitutional obligations and hold free and fair elections. Is that a crime in a democratic country?