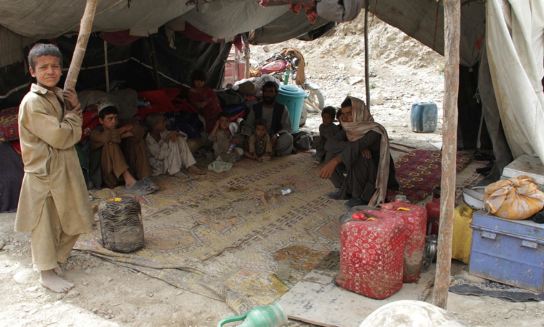 PESHAWAR: Whatever might be stance on the part of Taliban-calling itself Emirate Islami but the situation is worsening in all over Afghanistan where now millions of people are in dire need of food, medicines and other items of daily needs. Ironic to mention that almost all US led allies and the United Nations as well are reluctant to fulfill its responsibilities at this crucial stage.

A latest report reveals that 28.3 million people in Afghanistan need life-saving aid in 2023 – that’s a 350% increase in just five years. Economic decline, climate change, hunger and the effects of conflict have all driven needs higher and higher. Though further details of 2023 Afghanistan Humanitarian Needs Overview is awaited but it confirmed famine like situation for over 28 million people, majority of whom now stranded and their lives are at mercy of gun-toting Taliban- who are considered very loyal to neighbouring Pakistan spy agencies, playing key role in long standing Afghanistan conflict since early 70’s.

Certain journalists and public opinion makers, stranded in Kabul and several other main cities and towns of Afghanistan, believe that besides non-recognition of Taliban regime by the international community, Taliban’s own interpretation of Islamic doctrine has badly affected the routine economic activities including agriculture sector. Majority of the citizens prefers to be confined to homes as they fearing torture, aggression and even picking up at hands of Taliban on one or the other pretext. Likewise due to shuttering of girls’ schools and banning women from work outside of homes, the purchasing power of common men has been badly affected, thus posing very negative impacts on trade and business circles throughout that war devastated country.

Pleading not to be named, a highly responsible officer in the previous Dr. Ashraf Ghani government is now compelled to earn two time meals as a taxi driver. He said like him hundreds of others have adopted the same job. “Even some of them are running three-wheelers called Auto Rickshaw just for survival,” he remarked.

A large number of teachers, colleges and universities academicians become jobless due to Taliban’s introduced strict laws. Banning women in works outside of homes and women education, has multiplied miseries of war affected people. The volunteers of international non government and welfare bodies are now making attempts to collect data of such affected people.

A report from Kabul states, “ the Afghan women affected by Taliban bans on work and study fear for their futures. Displaced women fear they will be unable to support their families without access to work and education. On a recent snowy winter morning, with temperatures hovering at -10° degrees Celsius, a group of worried women have gathered at a community centre on the eastern outskirts of Afghanistan’s capital, Kabul. Many have recently completed a livelihood training project run by local NGO, Amputee Bicyclists for Rehabilitation and Recreation (AABRAR), a partner of UNHCR, the UN Refugee Agency.”

Save the children, an international body in its report states, “three weeks since the Taliban announced that Afghan women were banned from working for any non-government organisations (NGOs), Save the Children said it was restarting some of its activities where reliable assurances had been given for a full and safe return to work for its female staff.”

David Wright, Save the Children’s Chief Operating Officer, said: “Following the ban on female aid workers announced by the Ministry of Economy on 24 December 2022, Save the Children paused its activities. Our female staff are essential for the safe and effective delivery of our services, and we simply cannot operate without them. Women make up 50% of our workforce and are crucial for reaching women and girls. “While the majority of our programmes remain on hold, we are restarting some activities – such as health, nutrition and some education services – where we have received clear, reliable assurances from relevant authorities that our female staff will be safe and can work without obstruction. Organisations like Save the Children have been essential in helping Afghan children and their families survive for many years, especially over the past 18 months as an economic downturn and natural disasters have plunged the country into a catastrophic crisis. More than 28 million children and adults will need humanitarian support in 2023.

Despite its uncertain stance regarding the current situation of Afghanistan, the UN officials are holding frequent meetings and discussions with the Taliban high ups. The Executive Director of UN Women, Sima Bahous, has linked humanitarian aid to Afghanistan with women rights while talking to the Taliban deputy prime minister Mullah Abdul Salam Hanifi, in Kabul on Wednesday. The Taliban deputy prime minister office in a statement, She told Hanafi that aid to Afghanistan is linked to the activities and working opportunities of women. She told him the Taliban should find opportunities for women based on values and culture of Afghanistan.   A high ranking UN delegation led by Deputy Secretary-General, Amina Mohammed has also in Kabul since last Monday.

Likewise the ICRC in a report states, “Earlier this week, the MoPH offered assurances that female health staff, and those working in office support roles, can resume working. Based on this clarity, IRC has restarted health & nutrition services through our static and mobile health teams in four provinces of Afghanistan

Though during previous governments of Dr. Ashraf Ghani and Hamid Karzai, the Organisation of Islamic Countries (OIC) remained very inactive but now after empowering the Taliban, it initiated some steps including addressing food needs of affected families. Couple of days back, a report from Kabul states, ” the OIC On Thursday, 19 January 2023, in the Afghan capital, Kabul, the food baskets project was launched for the most needy families in Afghanistan, funded by King Salman Humanitarian Aid and Relief Centre (K S Relief) and implemented by the OIC Mission in Afghanistan. The project will cover 25 Afghan states, and 47,400  food baskets will be distributed to 284000 beneficiaries of the project.