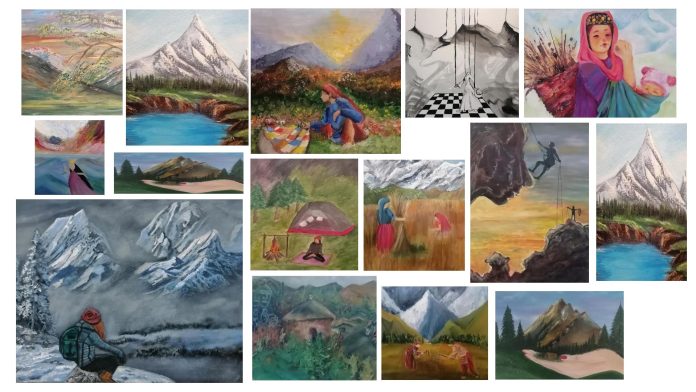 Rawalpindi – As many as 57 paintings in oil on canvas by the students of twin cities were put on display at Rawalpindi Art Gallery in collaboration with the Punjab Arts Council Rawalpindi on Wednesday. Devcom-Pakistan (Development Communications Network) organized the exhibition of artwork, culminated at a live painting competition on the theme “Women Move Mountains” organized at the Fine Arts Department of the Fatima Jinnah Women University.

Mostly the paintings depict the struggle of mountain women for environmental conservation, socioeconomic development, working in the fields while taking care of their families and children. Some of the paintings reflect the landscape of mighty mountains, water resources, natural habitats, and women’s plight of glaciers melting and degradation of mountains as it affects their life and livelihood. The artworks highlight the women’s struggle in combating real-life challenges in the changing climate, women in mountain ecosystem conservation, and cultural heritage from the northern parts of Pakistan. They depicted the impact of climate change on life in mountains besides the aesthetic value.

Speaking on the occasion, Devcom-Pakistan Executive Director and founder of Pakistan Mountain Festival Munir Ahmed said: “Art plays a central role in educating people about the present day challenges confronting us. The colours and forms touch our hearts and souls. The exhibits highlight mountain women’s role in environmental protection and social and economic development in mountain areas. Both women and mountains are the neglected ones in our society. Women are often the primary managers of mountain resources, guardians of biodiversity, keepers of traditional knowledge, custodians of local culture and experts in traditional medicine. Somehow, mountain women’s potential and contribution to conservation is undermined. Mountain women’s climate resilience shall be the focus to empower them to face the emerging challenges.”

First prize winner Muhammad Adullah of National College of Arts (NCA) Rawalpindi in his conceptual work painted in black and white acrylic on canvas a woman holding a crescent in her hands but her head is chopped off, and her blood flowing from top to bottom of mountains.

Wisal Khan won second prize for his work in oil on canvas. The eye-catching mountains and a woman climber in shades of light with rationally reflected contours of mountains in the glimmering tones. The proportionate treatment to the surface made him successful.

Head of Art and Design at the Westminster Academy Riffat Ara Baig said that they have been engaged with students of different age groups for the last two decades to sensitize them about the environment and conservation of natural resources. The educational institutions shall consistently engage their students and their parents to raise awareness about rational use of resources around us.