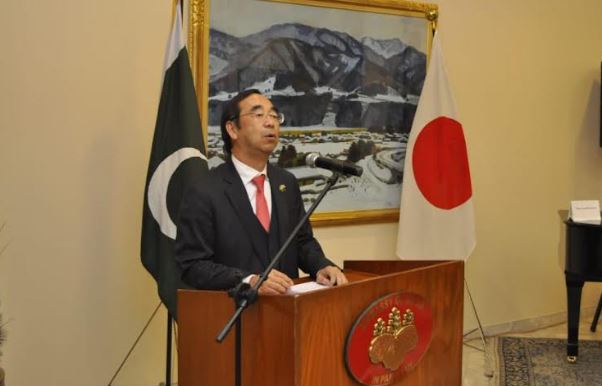 ISLAMABAD: Ambassador of Japan WADA Mitsuhiro has said the relationship between Japan and Pakistan has been very close as “Deerina Dost” and continues to spread through mutual cooperation based on shared values such as democracy, peace and sustainable development. Japan attaches immense importance to its relationship with Pakistan and is fully committed to further improving ties in all areas of mutual interest. It is clear that you are very important for materializing those shared values.

The Ambassador further said, he was glad to say that both nations have been supportive to each other and that this year we are celebrating the 70th anniversary of the establishment of diplomatic relations.

‘Our diplomatic relation was established on April 28 in 1952. Pakistan was one of the countries which welcomed Japan back to the international arena after the World War II. Pakistan helped Japan diplomatically by sending a delegation to participate in San Francisco Peace Treaty. Pakistan was the first country that started to export cotton to Japan in the 1950s, which played an important role for the Japanese post-war reconstruction. Japan processed raw cotton from Pakistan into yarn and cloth. Japan on the other hand exported machinery such as spindles to Pakistan. In this way, we helped each other particularly in the textile sector’.

The ambassador said, during the first decade after Pakistan’s independence, a number of Japanese business offices were set up in Karachi mainly for trading purposes. For example, the third overseas branch by the Bank of Tokyo in 1953 and the second overseas office by the Japan External Trade Organization (JETRO). This portrays traditional friendship including business activity between the two countries.

Today, we continue to make further efforts to promote business relationship.  We are working for more business friendly environment for activities of foreign companies in Pakistan, which will surely lead to mutual economic benefits.

As for the Official Development Assistance (ODA) from Japan, Pakistan is one of the first countries, which Japan started to provide with since 1954.  Japan remains one of the major bilateral development partners to Pakistan since 1954, extending assistance in multifaceted sectors of socio-economic development. The total value of assistance has amounted to $11.7 Billion, and 7,273 trainees have been accepted from Pakistan as of January 2022. This includes Japanese concessional loan, grant assistance, and technical cooperation, that have been utilized mostly for supporting infrastructure and social development, including assistance on creating roads, power generation / transmission / distribution, water and sanitation, agriculture, education, health, security, disaster management, climate change and human resources development.

The Kohat tunnel, Pakistan Institute of Medical Sciences (PIMS), the construction of steel bridges near Fort Munro which connects Southern Punjab to Balochistan via N-70, Indus Highway, Weather Forecasting and Surveillance Radar System are a few examples of Japanese assistance.

Among others, polio eradication is one of the focused areas of Japanese assistance. Since 1996, the Government of Japan together with other partners has been consistently assisting Pakistan to eliminate this disease.

JICA is very active in Pakistan as you know.  The video you are watching on the screen today is called “Weave Your Dreams” which is showing JICA’s activity to support women empowerment through technical training. You will watch the success stories of female graduate from three garment related vocational training institutes in Faisalabad and Lahore.

As a trusted partner, Japan has tirelessly been supporting Pakistan.  It was at the time of the devastating earthquake in 2005, countrywide floods in 2010 and 2022,

Other type of scholarship even includes professional training courses such as the Teachers Training Course as well as the Young Leaders Program for the Governmnet officers, aiming to provide an opportunity to learn modern knowledge and advanced skills in Japan. In 2018, Japan also started another human resource development scholarship called JDS, which is exclusively for young Pakistani civil servants to acquire higher education in top Japanese universities with the purpose of nation building for Pakistan.

People-to-people exchanges are the foundation of our friendship from a long-term perspective. In this regard, I actively support events and programs which encourage further interactions and deepen mutual understanding.

This year Pakistani military musical band participated in the annual grand concert organized by the Japan Self Defense Forces in Japan.  With the recent active participation by JSDF in AMAN 21, I wish to see such interactions will help further deepen the multi-layered cooperation between the two countries.

‘On the occasion of 70th anniversary, we must renew ourselves to further develop our close ties for next 70 years as “Deerenah Dost”. We should make a firm commitment to deepen our cherished ties which will amplify the welfare of both peoples’, he concluded.