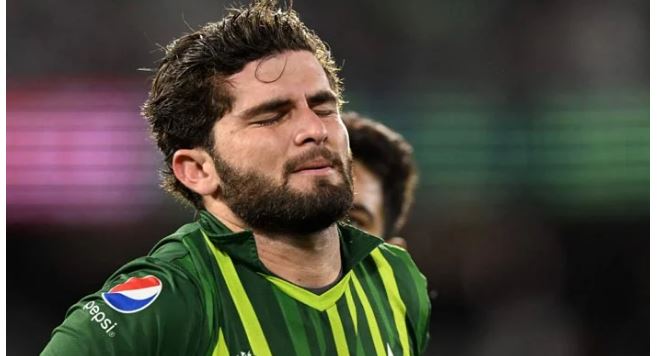 ISLAMABAD: Pakistan pacer Shaheen Shah Afridi might not be able to participate in the opening Test of the three-match series against England which is set to start on December 1 at the Pindi Cricket Stadium, The News reported Monday.

Shaheen’s right knee injury re-emerged during the T20 World Cup final on Sunday after he “landed awkwardly” during the match and couldn’t continue his over.

“The same right knee which troubled him of late hit the ground when he took Brook’s catch. It definitely is a sort of recurrence of the same injury. The seriousness of his injury is yet to be determined. The team management has decided to judge the seriousness of his injury on the team’s return to Pakistan,” a team management official told the publication.

The News learned from sources within the team that Shaheen would be in no position to spearhead Pakistan’s attack at the outset of the three-match Test series.

“I fear that Shaheen could well be seen missing the entire Test series against England. He requires a lengthy rest and treatment to overcome his knee problem once and for all,” a source said.

“So it would be too risky to even think of playing him in the series at all — what to talk about the first Test,” it added.

In all probability, Pakistan will go into the Test series against England with a changed attack. When contacted, one of the former Pakistan Cricket Board doctors opined that Shaheen could miss the entire season.

“If you want a fit and ready Shaheen for the next World Cup (2023, 50-overs aside), you have to give him at least three to four months’ break to make him completely fit injury,” he said.

In the T20 World Cup final against England, the 22-year-old fast bowler dismissed Alex Hales and later helped Shadab Khan get Harry Brook’s wicket and caught the ball right on time, but fell on his right knee.

In the 16th over, Shaheen came in to bowl his first delivery but appeared visibly in pain with very few chances to continue in the game. The pacer had to walk off the field due to knee discomfort and was replaced by Khushdil Shah in the field while Iftikhar Ahmed finished his over.

The Men in Green lost to England in the final match of the shortest format of the game which took place at Melbourne Cricket Ground.