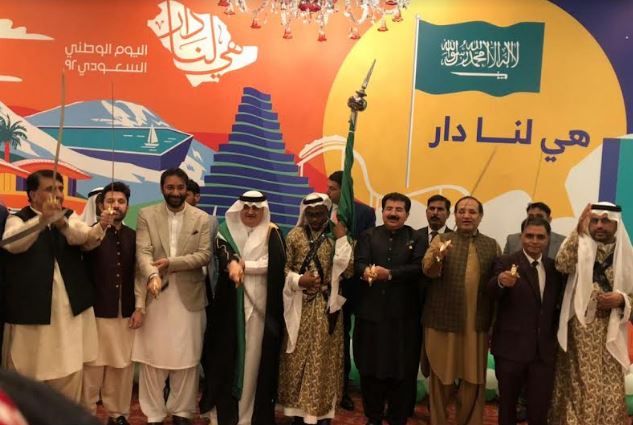 While speaking on the occasion Chairman Senate Muhammad Sanjrani thanked the Ambassador and the Royal Embassy of Saudi Arabia for the warm invitation to be a part of such momentous day.

Chairman Senate remarked that “It is a pleasure to be here today with such distinguished friends and brothers from the Kingdom of Saudi Arabia. After seeing the sentiments here, I can only imagine the wonderful celebrations back in your home country.

I on behalf of the Senate and the people of Pakistan, I extend to you, our heartfelt felicitations and best wishes on this National Day.”

Muhammad Sadiq Sanjrani said that “Kingdom of Saudi Arabia enjoys a very elevated position as the religious home of Muslims all around the world, as it is the sacred land of our beloved Prophet Muhammad (s.a.w).” He further added that Pakistan sincerely appreciates all the efforts of His Highness, King Salman, to bring peace and prosperity for his people. Chairman Senate also conveyed his good wishes and prayers for Saudi Ruler’s long and healthy life. He also appreciated the efforts and initiatives of the Saudi leadership for continued improvement of services related to Hajj. “Despite the disruption due to COVID-19, this year’s Hajj arrangements were unmatched, for which we have nothing but praise. I must also note here from my personal experience that His Royal Highness, Prince Muhammad Bin Salman, as a young visionary leader has introduced remarkable new facilities for pilgrims through use of IT and other innovations.” He added.

While commending the role of Crown Prince, Muhammad Bin Salman, he said that He has always expressed very warm sentiments towards Pakistan. “He is a leader on mission, whose progressive and modern ideas continue to inspire the youth. His initiatives like the Misk Foundation, the multi-billion-dollar tech city of Neom, the E-sports strategy, and environmental efforts to combat climate change seem to only be the tip of the iceberg. When I visited Kingdom of Saudi Arabia in 2018, I was impressed by his idea of Youth Center for guiding and preparing the youth for future. I also came to know that His Royal Highness Prince Muhammad Bin Salman works for over 18 hours a day, motivating and inspiring the people of his Kingdom, especially the youth, and leading them by example. Pakistan takes pride in its talented youth, and offers its full support to His Royal Highness with his youth engagement efforts.”

He underlined that continued engagement and collaboration  is required in order to achieve shared goals. Muhammad Sadiq Sanjrani called for increased exchanges as they help to further strengthen the bond between two countries.

He thanked Saudi Leadership for its timely support to Pakistan in helping the flood affectees of Pakistan.

Chairman Senate apprised the gathering of the widespread destruction caused by the recent floods and the impending humanitarian crisis. Saudi Arabia has so far sent fives flights and 100 trucks for emergency relief, carrying over 950 tons of food and other relief items to 17 flood-ravaged districts of Pakistan. He also appreciated  Saudi Ambassador  for personally reaching out to flood affectees in far flung areas. Lastly Chairman Senate wished the Royal Family and the people of Saudi Arabia prosperity, well-being and success in all times to come.