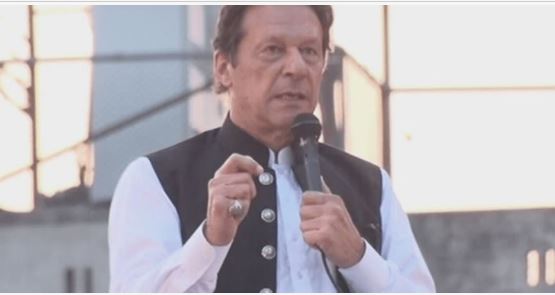 LAHORE: Pakistan Tehreek-e-Insaf (PTI) Chairman Imran Khan announced that he would start his “Haqeeqi Azaadi” on Saturday to get the country rid of the cabal of thieves and corrupt rulers, as he called on supporters to get ready for his call.

Speaking at a lawyer’s convention here on Wednesday, PTI Chairman said that he would give a call and they would get their country liberated in real terms.

“You have to stand up for law and governance in this country. I need the lawyers’ community for my country,” he added.

Imran Khan said that those issuing threats from unknown numbers should be threatened back and should tell them that constitution guarantee them right to freedom of speech.

Imran said that he will soon give a call for long march to Islamabad, urging the nation and lawyers to support him. “Together we will establish the rule of law in this country and bring real freedom to Pakistan,” he added.

He lashed out at the government for its flawed economic policies, saying the rupee had greatly depreciated against the dollar and caused inflation and unemployment to soar, adding that the economy cannot improve until the justice system is improved.

PTI Chairman said that the inflation is the highest in Pakistan s 50-year history and his party will steer the country out of this slack.

He alleged that while the poor people were suffering, the wealth of those in the government was increasing. Imran stated that Pakistan was reeling under worst crisis in terms of food insecurity but the current rulers were busy to get rid of their corruption cases through NAB law tweaks.

He said that no one in the West has the courage to illegally occupy land, while no one is allowed to commit violence like Shahbaz Gill but in Pakistan, cases are being lodged against journalists.

“The law enforcement agencies whose job it is to implement the rule of law are the ones breaking the law and committing injustice against the people,” he added.

He said that in a country where there is no rule of law, the money flows from abroad and hence it does not have an ideology.

He further urged the public to never ever vote for those political parties whose leaders have vested interests lying outside the country, as it was a conflict of interest. Imran Khan went on to say that the absence of rule of law led to investments drying up and boosted the corruption.

“If we want to get Pakistan out of this quicksand, then we must establish rule of law in the country. Until that happens, our economy will continue to suffer,” he added. Imran said that the difference between rich and poor countries was rule of law.

“In poor countries, there is law but not justice, while in rich countries rule of law exists. The society in which there is no rule of law gets destroyed,” he further said.

PTI Chairman urged lawyers when he called them, they must come out for a prosperous Pakistan, as he would give Pakistan real freedom.