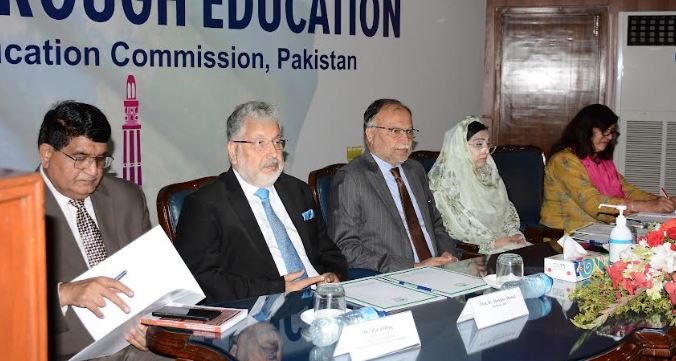 Islamabad, Sep 21: /DNA/ – Federal Minister for Planning, Development and Special Initiatives Ahsan Iqbal has stressed the crucial need for bringing a behavioral change in the Higher Education Institutions (HEIs) to counter lack of tolerance in the society.

The Minister mentioned that over 3 million students are currently enrolled in HEIs in Pakistan whose potential should be used to eradicate extreme polarization and radicalization in the society.

Sharing a personal incident, Mr. Iqbal said, “On May 6, 2018, I faced an attempt to murder and the bullet from that attack is still inside my body. It reminds me every day of the importance of bringing a positive change in our youth so as to use their potential productively.”

The Minister mentioned the establishment of Young Peace and Development Corps in universities during his previous tenure and said that those societies served as a platform to promote peace and development at grassroot level. He requested the Chairman HEC to revive these societies so Pakistan can advance towards prosperity. He emphasized that it is also our religious responsibility to work towards peace.

He also used the opportunity to raise awareness regarding the floods in Pakistan and sought HEC’s support to activate at least 2 million out of the total 3 million of our student body and urge them to raise donations and send off one food bag each to ensure that none of the flood victims sleeps hungry.

Chairman HEC enlightened the students about the history of International Peace Day. He said, “The International Day of Peace was established in 1981 by the United Nations General Assembly. Two decades later, in 2001, the General Assembly unanimously voted to designate the Day as a period of non-violence and cease-fire.”

He also quoted Nelson Mandela to highlight the importance of education in establishing peace. “Education is the most powerful weapon which you can use to change the world, says Mandela and I agree with him.”

Dr. Mukhtar Ahmad urged the students to act as a peace ambassador in their daily lives and strive for establishing peace wherever they can.

Dr. Zia ul Haq, Director General, Islamic Research Institute, International Islamic University pointed out that “Al-Salam is one of Allah’s names and our religion Islam is also named after it. Both these words signify peace, but it is worrisome that our society does not reflect it.”

Dr. Saima Ashraf Kayani, Assistant Professor, Fatima Jinnah Women University enlightened the audience with Martin Luther King Jr’s definition of peace. “Peace is not merely the absence of war but the presence of justice, of law, of order,” she said, adding that “It is sad that Pakistan ranks at 159 out of 163 counties in Global Peace Index and we must do something to improve it.”

The students appreciated HEC’s efforts for raising awareness regarding the International Peace Day.