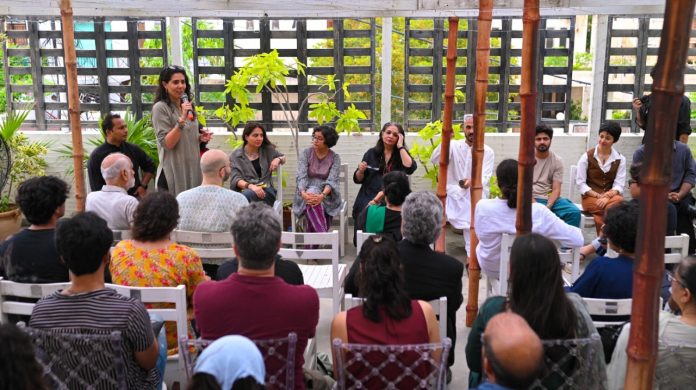 KARACHI: The British Council and Koel Gallery have partnered to launch the ‘Saahil Ki Kahaaniyan – Stories from the Coast’ project exhibition at the Koel Gallery in Karachi on Friday, 12 August. The exhibition which continues until 19 August features multidisciplinary works that aim to raise awareness of the impact of climate change on the coastal areas of Pakistan, particularly its fragile mangrove ecosystem, with a view to promoting sustainable coastal development.

The project is part of the British Council’s Pakistan-UK Season: New Perspectives programme to mark the 75th anniversary of Pakistan.

In February 2022, the project awarded grants to Pakistan-based artists exploring this theme through a variety of mediums, culminating in the curated exhibition close to Pakistan’s independence day. The British Council arranged a diverse selection committee, including experts from the UK, to review applications – a process that was quite intensive, given the large number of high-quality applications that were received. After a detailed vetting exercise, four creative teams were selected to work on this project.

Visual Artist, Curator and Director KOEL Gallery, Noorjehan Bilgrami said:“I am sincerely hoping that these projects through the common platform of ‘Saahil Ki Kahaaniyan’, amalgamating at KOEL Gallery, will begin the process of collective research that records, investigates and disseminates the awareness of our legacy that needs to be owned, protected and treasured. It is a beginning for this exciting work to continue”

Artist Mahera Omar presented a silent cinematic journey through a delicate wetland ecosystem on the shores of an industrial city, documenting the precious biodiversity which is in grave danger of being lost under her project titled, ‘Kabhi aisay bhi hota hai ke kinare doob jate hain…’. Marvi Mazhar, Abuzar Madhu &Swalay Muhammad presented ‘Milaap’, an exploration of the sacred geography of the urban/rural estuary where the river meets the coast, focusing on Khizr, the Darya Shah, whose coordinates are sometimes imaginary on liquid grounds in the form of astana, a promised space to protect the coast from climatic and human infrastructural ruptures. Taqi Shaheen& Sara Khan Pathan worked on ‘The Shape of Island’, a research project to design ‘Machi Wachi’ – a board game that acts as a storytelling interface for reflection and ecological understanding about scarcity of natural resources around Bhit Island. While, Zulfikar Ali Bhutto &Janan Sindhu presented ‘Bulhan Nameh’, a series of immersive installations of fabric and video that speak to the plight of one of Pakistan’s shyest animals, the Indus River Dolphin, as well as the communities that have been key to its conservation.

Director Arts, British Council Pakistan Laila Jamil said: “Saahil Ki Kahaaniyan’ has been a very exciting project for us – to have been a part of the selection of such wonderful artists and activists, to be able to see the variety of topics they have chosen, their sensitive approaches, deep research, and love of their respective areas of work – it has been a privilege to be part of their creative journey. We believe art has the potential to challenge and change mindsets for a more sustainable and inclusive future. We are grateful to Koel Gallery for showcasing this project and to the Rangoonwala Foundation for their ongoing support for the arts in Pakistan.”