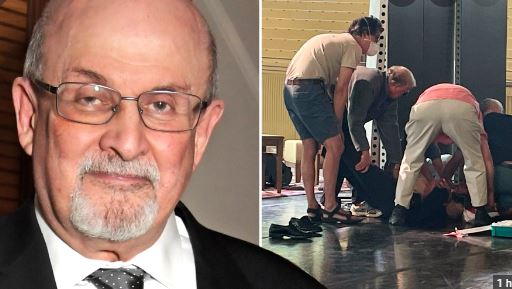 NEW YORK, Aug 12: Salman Rushdie, the controversial British author of Indian origin, whose book “The Satanic Verses” outraged the Muslim world for its blasphemous content and led to death threats from Iran in the 1980s, was reportedly stabbed Friday before giving a speech in Chautauqua, a town in western New York, according to media reports.

An Associated Press (of America) reporter witnessed a man storm the stage at the Chautauqua Institution and begin punching or stabbing Rushdie, 75,  as he was being introduced.

The author was taken or fell to the floor, and the man was restrained.

A bloodied Rushdie was quickly surrounded by a small group of people who held up his legs, presumably to send more blood to his chest, according to the American news agency.

In a press release, the New York State Police confirmed that a man rushed the stage and stabbed Rushdie in the neck.

“Rushdie suffered an apparent stab wound to the neck, and was transported by helicopter to an area hospital,” the press release said.

“His condition is not yet known.   The interviewer suffered a minor head injury.

“A State Trooper assigned to the event immediately took the suspect into custody. The Chautauqua County Sheriff’s Office assisted at the scene.”

“The Satanic Verses” has been banned in many countries since 1988. A year later, Iran’s late supreme leader Ayatollah Ruhollah Khomeini issued a fatwa, or edict, calling for Rushdie’s death.

Iran has also offered over $3 million in reward for anyone who kills Rushdie.

Iran’s government has long since distanced itself from Khomeini’s fatwa, but anti-Rushdie sentiment lingered. Since then he remained out of the public eye, but kept writing books.

The Chautauqua Institution is a performing arts center from June through September that hosts artists related to the fields of visual arts, dance, theater, and music.

Ishaq Dar likely to return to Pakistan along with PM Shehbaz

No recognition of Israel, we are with Palestine in all circumstances: Pak officials

We will continue to raise voice against Indian atrocities at global level: Speakers