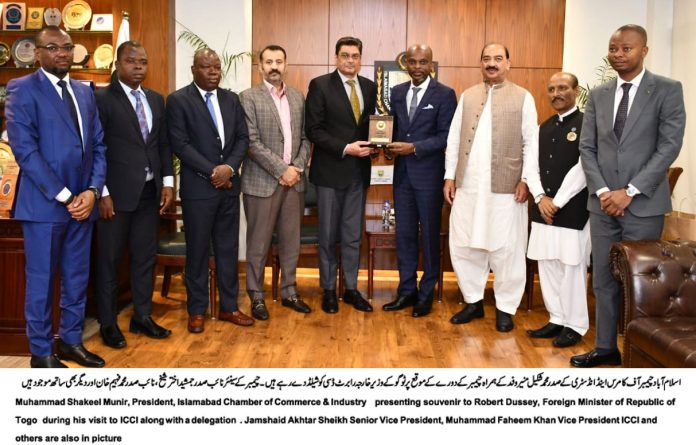 ISLAMABAD, AUG 11 (DNA) — Robert Dussey, Foreign Minister of Republic of Togo along with a delegation visited Islamabad Chamber of Commerce & Industry (ICCI) and addressing the business community, said that his country was keen to enhance trade relations with Pakistan as both countries have good potential to promote bilateral trade in many areas.

He said that Togo and Pakistan should develop a mechanism for sustainable development of two-way trade ties to achieve mutually beneficial outcomes.  He said that Pakistan could achieve better market access to the African region by developing close cooperation with Togo.

He said that increased trade between Togo and Pakistan would present a win-win situation to both countries. He hoped that his visit to Pakistan would open up many new avenues of promoting trade and economic relations between the two countries.

Speaking at the occasion, Muhammad Shakeel Munir, President, Islamabad Chamber of Commerce & Industry warmly welcomed Robert Dussey, Foreign Minister of Togo and distinguished members of his delegation to ICCI and gave them a brief introduction of the Chamber. He said that Togo is located in West Africa and Pakistan is focusing on the African region for promoting its trade and exports.

He said that the close cooperation of Pakistan with Togo would help it in exploiting the potential business opportunities in the African markets. He said that the bilateral trade between Pakistan and Togo is not very encouraging and stressed that both countries should encourage regular exchange of trade delegations to explore all potential areas of mutual cooperation.

He said that ICCI would like to develop close liaison with the chamber of commerce and industry in Togo for promoting business linkages between the private sectors of both countries and exchange information about potential areas of trade cooperation.

ICCI President said that Pakistan and Togo have good potential to enhance cooperation in agriculture, mining and other sectors for mutual benefits. He hoped that the visit of Foreign Minister of Togo along with a delegation to Pakistan would start a new chapter of growing bilateral trade and economic relations between our two countries.