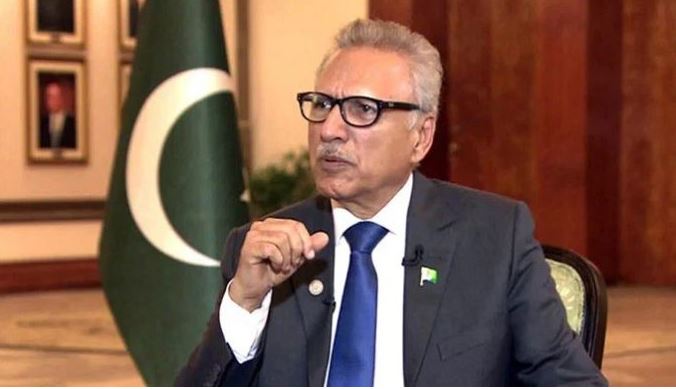 ISLAMABAD, Jul 13 (DNA): President Dr Arif Alvi on Wednesday said that the aggression and the cheap tactics of the Indian Occupation Forces had neither succeeded in the past, nor would be able in the future to suppress the indigenous movement of the Kashmiri people.
The president, in his message on Kashmir Martyrs’ Day, paid rich tribute to the martyrs and brave people of Kashmir  for their continuous freedom struggle.
He said only the resolution of Kashmir dispute in accordance with the resolutions of the United Nations Security Council could guarantee the regional peace.
He saluted the the resolve of the Kashmiri people who embraced martyrdom on July 13, 1931 by the Dogra rule.
He said the Kashmir Martyrs’ Day was also a reminder of the decades-old struggle of the Kashmiri people for their right to self determination.
He said the people of Kashmir had been sacrificing their lives since generations to keep the passion for freedom alive.
The president demanded the Indian Occupation Forces to immediately stop the human rights abuses in IIOJK and take measures for holding an impartial plebiscite.
He reiterated that the resolution of Kashmir dispute as per aspirations of the Kashmiri people as well as the UNSC resolutions was inevitable for peace in the region.
He said on Kashmir Martyrs’ Day, the nation should reiterate a pledge to continue  its diplomatic, moral and political support to the Kashmiri people till they get their right to self determination.