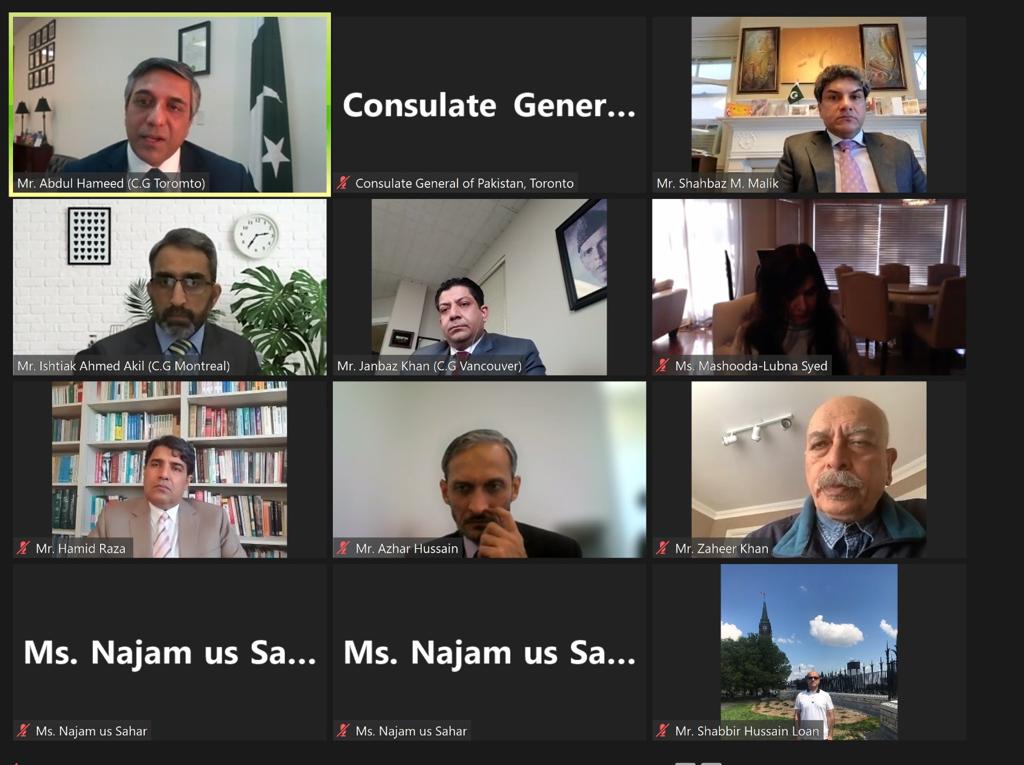 The Government of Pakistan has decided to restore National Database Registration Authority (NADRA) facility in the Consulate General of Pakistan Toronto for the convenience of compatriots seeking NADRA services.
This was disclosed during an online public forum-cum-ekatchehry organised by the Pakistan High Commission in Canada and hosted by Consul General of Pakistan Toronto. The event was attended by Chargé d’affaires for Pakistan in Canada Mr. Shahbaz Malik, Consul General of Pakistan Montreal Mr. Ishtiak Ahmed Akil, Deputy Consul General of Pakistan Vancouver Mr. Ghulam Hussain and members of the Pakistani diaspora in Canada.
Answering various questions of the community, Consul General of Pakistan Toronto Mr. Abdul Hameed who moderated the event, said the decision to re-establish NADRA facility in Toronto had been taken in view of difficulties faced by community members in accessing NADRA services, including new National Identity Card for Overseas Pakistanis (NICOP), passports and uploading their fingerprints for these documents from remote locations.
Chargé d’affaires for Pakistan in Canada Mr. Shahbaz Malik said Pakistan High Commission and its Consulates in Canada were at the disposal the diaspora. He said the Mission officials were always accessible in person as well as through phone, email or the social media accounts being operated by the Mission and its Consulates to engage with the community in real time. He said the government had started providing visa and passport services online, but for any other services the members of the diaspora were welcomed to visit the High Commission and its Consulates.
Consul General of Pakistan Montreal Mr. Ishtiak Ahmed Akil said they were all set to operate a dedicated facilitation centre in the Consulate to provide the community members technical help and facilitation in completing their online applications and uploading documents on the NADRA system.
To a question, Deputy Consul General of Pakistan Vancouver Mr. Ghulam Hussain said the Consulate had conveyed to the NADRA higher ups the concerns of Pakistani expatriates living in western Canada in travelling long distances to visit the Consulate in Vancouver just because accessing the NADRA system from home did not help sometime due to limited number of attempts allowed for upload of documents and fingerprints for NICOPs and other services.