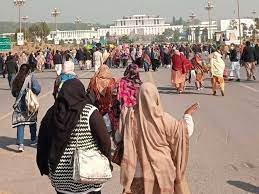 ISLAMABAD , DEC 02 : Public school teachers on Thursday staged a protest outside the Parliament House in Islamabad amid heavy police deployment. Per the report, the teachers are protesting against the decision to hand over the management of public schools to the municipal corporation and are demanding the reversal of the decision.

The report further mentioned that protesters gathered on both sides of Shahrah-e-Dastoor holding placards. They chanted slogans and reiterated their demands, stating that once public schools come under the authority of the mayor, teachers will have their allowances reduced, while their promotions will also be stopped.

The protesters threatened that if their demands are not met, they would also students and their parents to join them in a bid to intensify the protests.

It is pertinent to mention that owing to the ongoing protests, educational activities have been suspended in public schools of Islamabad for the last three days.