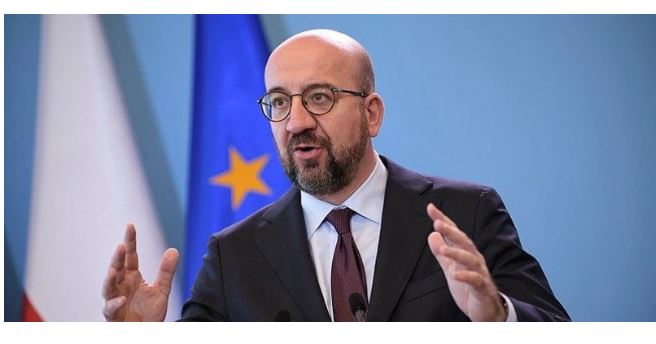 The escalating crisis on the Polish-Belarus border as thousands of migrants mass to try to enter the EU has triggered debate in the bloc over whether to fund border fences or other barriers.

European Council President Charles Michel, who convenes meetings of leaders of EU countries, said during a visit to Warsaw on Wednesday that such financing was “legally possible” and actively being discussed.

But that runs counter to what European Commission chief Ursula von der Leyen told EU leaders at a summit three weeks ago, that “there will be no funding of barbed wire and walls“.

Michel spoke of “physical infrastructure” and did not specify whether he meant razor-wire or other barriers. But his words suggested EU member states were looking at that.

“We are going to talk about the physical infrastructure and the possibilities of their financing,” he told a Warsaw news conference alongside Polish Prime Minister Mateusz Morawiecki.

“I’m talking about a physical infrastructure that would protect the EU better, and I mean here, above all, first-line countries — because national borders are also EU borders.”

A Commission spokesman, Adalbert Jahnz, told journalists in Brussels that von der Leyen had been “very clear about her position”.

He noted that the EU already funds other sorts of border infrastructure, such as border surveillance towers and control posts, as well as equipment such as infrared cameras, drones and other aircraft, and “perimeter protection systems“.

“There is very substantial European funding for very effective and important actions when it comes to border management, and including border infrastructure,” he said.

Last month, a dozen countries including Austria, Denmark, Greece, Lithuania and Poland wrote a letter to the Commission requesting EU financing of border fences. Von der Leyen rejected it at the October summit.

If EU countries overcome Commission resistance, border barriers would mark a transformation of the bloc from a region that traditionally accepted asylum-seekers.

Critics among lawmakers in the European Parliament and NGOs say the bloc is abandoning some of its values to become more of a “fortress Europe”.

But Brussels and EU national governments are determined to counter what they see as a “hybrid attack” on their borders orchestrated by Belarus, meaning a combined military-political operation.

NATO has also described it as a “hybrid tactic”.

Western governments have accused Belarusian president Alexander Lukashenko of luring the migrants to his country and sending them to cross over into EU member Poland in retaliation for sanctions. He denies this.

EU unity with Poland against Belarus is strong, but clouded somewhat by the fact that Warsaw and Brussels are locked in a fight over judicial reforms and other moves by Morawiecki’s populist government seen as rolling back EU democratic norms.