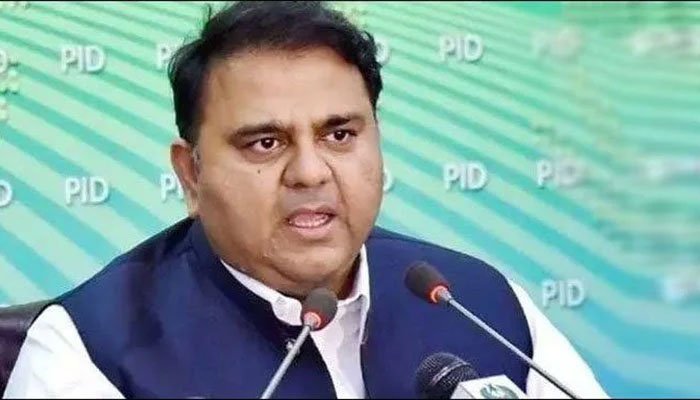 ISLAMABAD, NOV 05 : Federal Minister for Information and Broadcasting Fawad Chaudhry on Friday blamed the Sindh government for the increase in sugar and flour prices while also criticising the economic policies of previous governments.

Addressing a press conference in Islamabad alongside Minister for National Food Security and Research Syed Fakhar Imam, he began by saying that the PTI government had to pay back the debts incurred by previous governments.

He said the country was suffering as a result of the bad “economic policies” implemented by previous governments. “To those who tell us that we always blame previous governments, we can’t fix their [mismanagement] in three years,” the minister argued.

He singled out the “horrible” economic policies of former finance minister Ishaq Dar and noted how former prime minister Shahid Khaqan Abbasi and PML-N leader Miftah Ismail had also been vocal about their criticism of the same. “But now they are offering justifications.”

Addressing Abbasi and Ismail, he called on the two PML-N leaders to develop “courage” and to clearly say that Dar’s policies had ruined the country’s economy.

Talking about sugar prices, Chaudhry said that reports of a hike in prices were primarily coming from Karachi. “The cost of essential commodities in Karachi is extremely high,” he added.

He noted that the price of a bag of wheat flour was Rs380 more in Karachi as compared to Punjab. Similarly, other essentials including sugar are also more expensive in Sindh, he said.

“The Sindh government needs to clarify its position. First, they didn’t release wheat and now they are delaying cane crushing. What is their agenda, what do they want?”

He said the difficulties being faced by the people of urban Sindh were a direct result of the provincial government’s policies.

“As you can see there is lawlessness in the province […] there seems to be no trace of police officials and people are being murdered in broad daylight,” he said, referring to the alleged murder of a man at a PPP MPA’s farmhouse in Malir.

“There seems to be the law of the jungle in Sindh.”

The minister called on the media to highlight the sufferings of the people of interior Sindh and to pressurise the provincial government to carry out independent inquiries.

He went on to say that the Sindh government was not releasing wheat which was causing prices to soar exponentially in the province, particularly in Karachi.

He said the sugar crop in Sindh was the first to be cultivated, but the province was delaying crushing season.

He further said the country’s total sugar production per day was 15,000 tonnes, of which 9,000 tonnes was used by industries and the remaining was for domestic use.

According to Chaudhry, the government currently had 130,000 tonnes of sugar in its stocks which was sufficient for 22 days. In 15 days, he said, the crushing season would also begin in Punjab.

“So the increase in sugar prices is due to [price manipulation],” he said, alleging that most of the sugar mills in Sindh belonged to former president Asif Ali Zardari, while those in Punjab came under the Sharif family.

He told the presser that the private sector, which was in possession of 90,000 tonnes of sugar, was hoarding stocks. Dispelling the notion that the government was not taking action, the minister said the government had fixed sugar prices at Rs90 per kilogramme.

“Sugar mills had a profit of Rs16 at this price. But when we tried to get them to release the 90,000 tonnes of sugar, they took a stay order from the high court where the case is now pending.”

He appealed to the judiciary to take notice of the “crisis situation” being caused by private sugar mills and to decide the cases so that the burden on the people could be eased.

Talking about petrol prices, the minister said there was a global crisis. He said the government had steadily decreased local taxes on oil.

“If we had continued with the same taxes, petrol would cost Rs180 per litre and the government would have earned Rs400 billion. But the government has lowered taxes and has earned Rs50 billion,” he said.

He noted that international food and energy prices were the highest they had ever been.

Chaudhry said some people pointed out that the per capita income was higher in India and Bangladesh. “That’s because it includes the income of the Tatas and the Ambanis,” he argued, talking about two of India’s richest business groups.

“There is more poverty in these countries and their situation is worse than ours,” he claimed.

Turning to the recent relief package announced by Prime Minister Imran Khan, he said 130 million people would get a 30 per cent subsidy on flour, pulses and ghee.

“For the middle class, we have also introduced the health card under which they can avail free healthcare up to Rs1 million.”

He said that currently the people of Islamabad and Khyber Pakhtunkhwa could avail the scheme, while Punjab would soon follow suit. He called on the Sindh government to initiate this programme as well and provide relief to the people.

‘Govt has no shame’

In response to the information minister’s press conference, Sindh government spokesperson and Karachi Administrator Murtaza Wahab lashed out at the government for constantly blaming previous rulers.

Speaking to the media in Karachi, Wahab said that that in 2018 sugar cost Rs55 per kg. “People are searching for the Pakistan that PM Imran had promised them.”

He said that there had been an increase in cooking oil and ghee prices.

“They don’t have any shame,” Wahab said, adding that the PTI always blamed previous governments or the Sindh government.

“You always lay the blame on our shoulders. You sign deals with the International Monetary Fund (IMF) but blame Zardari.”

He said that the premier had announced a “historic relief package” a couple of days ago, and now the people were suffering because of it. “They increased petrol prices in the dead of the night.”

He also lashed out at those who said that the prices of commodities were lesser in Pakistan as compared to Canada. “You can’t compare the two […] the per capita income in Canada is higher.”

He said that the Sindh government was aware of the people’s suffering and had increased basic pay in the budget. “You talk about ehsaas but none of the other provinces increased salaries.”

He said that the government was lying when it said that petrol prices had increased globally. “Check for yourself whether or not there has been a decrease in the price of crude oil.”