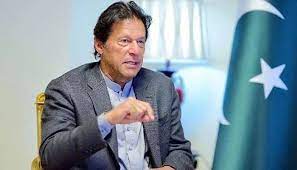 ISLAMABAD , NOV 03 : Hinting at hiking fuel prices, Prime Minister (PM) Imran Khan has said that the price of petrol in Pakistan is low, the prices of petrol will have to be increased further otherwise the deficit will increase.

Addressing to nation on Ehsaas Ration Program, the prime minister has said that he is really grateful for the support of friendly country as it helped to manage the stability of Pakistani rupee.

The premier said the package would be “the biggest welfare programme in Pakistan s history”, which he said would take the country towards becoming a welfare state.

The premier thanked China and Saudi Arabia for financially assisting Pakistan and said that had the country become a defaulter of the International Monetary Fund (IMF), the rupee would have depreciated more and inflation would have skyrocketed.

He said the PTI government had inherited a difficult economic situation, and thanked Saudi Arabia, the UAE and China for providing the help that saved Pakistan from defaulting.

“We had to approach the IMF, we were stabilising the country for a year and then corona came,” he said, lauding the NCOC for taking data-based decisions that helped Pakistan s coronavirus fight.

“We were internationally acknowledged for being one of the few countries to deal with Covid-19 in the best manner.”

“Considering the inflation, we are coming up with a package of Rs120 billion which will benefit 130 million people, PM Imran Khan said while announcing a historic relief package worth Rs120 billion to provide relief to the masses. “Under the said package, citizens will be able to avail a 30 per cent discount on three basic edible items, including ghee, wheat, and pulses.”

The premier said that considering that the masses are undergoing a tough time due to the inflation in the country, the government is introducing a package for 20 million families, which will — in turn — benefit 130 million Pakistanis.

“This [poverty alleviation] package, which is worth Rs120 billion, will be offered to Pakistani by the federal and provincial governments,” he said.

The premier announced that under the package, citizens will be able to avail a 30% discount on three basic edible items, including ghee, wheat, and pulses.

Commenting about the ongoing inflation across the country, Prime Minister Imran acknowledged that inflation was a major problem in the country, saying the media and the opposition had the right to criticise the government. He also asked the media outlets for a balanced approach when reporting on inflation.

But he said the media needs to balance and think whether inflation is rising because of our government or due to rise in prices in the international market.

Citing the example of Turkey, Germany, China, and the United States, the premier said that after 2008, these countries had also faced historic inflation.

“What can we do if inflation is being driven because of global factors?” the premier questioned as he cited the examples of oil and gas prices worldwide.

Comparing inflation of Pakistan with other regional countries, the prime minister said that Pakistan is the cheapest country in terms of petroleum prices. “In India, petrol is getting Rs250 per litre, while in Pakistan petrol is getting Rs140 per litre. And the price will have to go up further. Otherwise there will be a deficit. Flour is being sold at Rs83 per kg in India and Bangladesh but Rs60 per kg in Pakistan.”

“Yes, we are facing inflation in the country but you should also look at what the government is doing to alleviate the situation,” he said, adding that due to factors which is not in the hands of the government, petrol prices will have to be increased further.

Recounting the government s incentives for the construction and agriculture sectors, he said the country s economic indicators were positive. He said that PTI’s policies prevented economy from collapsing in COVID-19.

Shedding light on COVID-19n situation across the world, he said that unlike other countries, the Pakistani government made strategic decisions related to the imposition of a lockdown and saved factories from closing down.

“We had allowed construction industry to operate; we tried to save our exports because if they had stopped, then the dollar would have gone up against the rupee,” he said, adding that due to the government s policies, rice production had gone up by 13.6%, corn 8%, sugarcane 22%, wheat 8%.