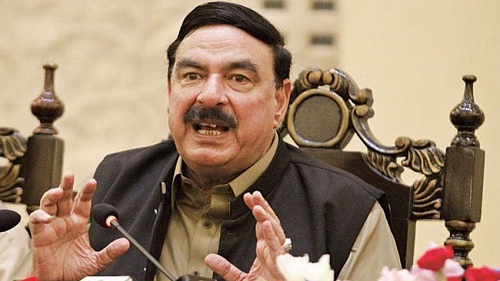 Islamabad : Interior Minister Sheikh Rasheed Ahmad has said anti-Islam forces are hatching conspiracies against Pakistan as it was a nuclear power and a strong fort of Islamic world.

Talking to a private News channel, he said the supporters of banned TLP should go back and avoid taking law into their hands.

Interior Minister said all possible measures would be taken to ensure writ of the government.

Replying to a question about banned TLP demands, Sheikh Rasheed said a resolution had been presented before the assembly.

To another question about French ambassador, he said the ambassador had gone back to his country.

He said the government will take all possible steps to ensure peace and tranquility in the country.

To a question about calling Rangers in Punjab, he said the Rangers are responsible to protect lives and property of the citizen.

He said we will stop the march towards Islamabad at all costs.