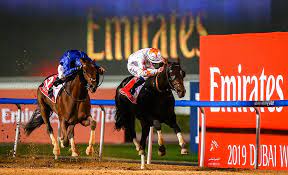 DUBAI , OCT 22 : The new horse racing season in the UAE will get underway at Jebel Ali Racecourse on Oct. 29. The UAE has five tracks and Jebel Ali, takes up a large chunk of land in Barsha, is one of the most popular. Famed for its garden party atmosphere, a normal year sees around 5,000 people congregate on its lawns for picnics and a great view of the uphill finish, one of the steepest in the world. Six days after Jebel Ali kicks off the season, and five after Sharjah holds its first meeting on Oct. 30, Meydan Racecourse will swing into action. The home of the $30.5 million Dubai World Cup meeting, scheduled for March 26, Meydan is iconic, a vast facility with the capacity for 60,000 racegoers and the best racing in the country. It will open with seven races on its dirt track, with the outer turf course staging racing from January. The month will see some of the best trainers, horses, and jockeys converge on Dubai for the eight-week World Cup Carnival, which in the past has welcomed winners from as far afield as Sweden, the US, Uruguay, and Australia. All five UAE tracks – Abu Dhabi, and Al-Ain concentrate primarily on purebred Arabian racing – count toward the Emirati championships for trainers, owners, and jockeys. The jockeys’ title has been dominated by Tadhg O’Shea in recent seasons and the Irishman will be aiming for a 10th championship this time around. He has the backing of champion owner Khalid Khalifa Al-Nabooda, as well as three-time champion trainer Satish Seemar, so will be favorite to lift the prize again. But O’Shea will be pushed all the way by his good friend Richie Mullen, who this season has the support of the powerful Al-Asayl Stables, while Italian rider Antonio Fresu, based with former champion trainer Musabbeh Al-Mheiri, should also ride plenty of winners, particularly at Meydan. Others to watch out for are Brazilian Sandro Paiva, who will ride for newly licensed Ali Rashid Al-Rayhi, and the experienced Pat Dobbs, who will once again return to Doug Watson.

Seven-time champion trainer Watson is again the one to beat in the handlers’ competition, although with more than 150 horses at his Zabeel Stables base, Seemar will make things hard for him. It would appear to be a three-way battle, with Ernst Oertel, who trains for Al-Nabooda, likely to be competitive despite concentrating solely on Arabians. The new season will be the first full campaign under the guidance of Sheikh Rashid bin Dalmouk Al-Maktoum, the chairman of Dubai Racing Club, while Mohammed Al-Shahi has taken over as general manager of Emirates Racing Authority, which governs racing at all five tracks. Under their stewardship prize money has been given a boost, new races have been introduced and – most importantly – crowds are likely to return for the first time since March 2020. General admission to all the courses is free and offers a unique day out at one of the UAE’s oldest and most popular sports.