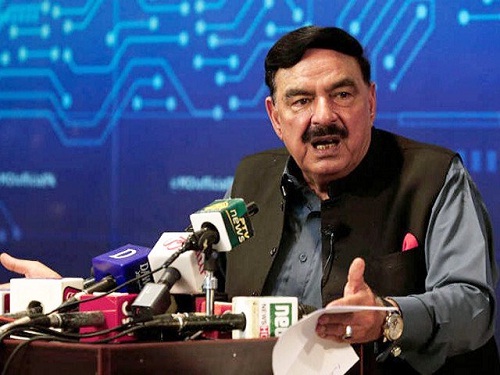 ISLAMABAD, 21 Oct 2021 (DNA):Minister for Interior, Sheikh Rashid Ahmed on Thursday vowed that except peaceful protests no one would be allowed to take the law into their own hands in the country.

“Whether it is the Pakistan Democratic Movement (PDM) or Tehreek-e-Labbaik Pakistan (TLP), neither should do anything to take the law in their own hands,” he warned while talking to media persons after attending the passing out parade and launching of air patrolling unit of Islamabad Police.

Rashid said, “The law will take its course if they try to take the law into their own hands as maintaining law and order is the responsibility of the state.”

He said that presently there was no any restriction on any political activity while the media was independent in the country.

The minister said that the media was free and there was open political discussion on all media.

“Our politicians are getting exclusive coverage in mainstream media as no such coverage is possible anywhere in the world. Pakistani media was playing an important role in educating people,” he added.

He said that the present government was working on several options to control inflation on the directives of Prime Minister Imran Khan.

Rashid said that the Prime Minister was seriously considering this issue as he wanted to address this as early as possible.

He said that the issue of inflation was connected with the changing international economic situation as no one in the government wanted inflation in the country.

The minister said that along with domestic matters, the government had to make policies considering international and regional changing situation.

Rashid said that the present government of Pakistan Tehreek-e-Insaf (PTI) would complete its tenure.

He added the present government was successfully running the state affairs.

The minister said, “Prime Minister Imran Khan is so lucky to have got such incompetent and ineffective opposition.”

He said that in order to ensure foolproof security 1,000 additional personnel were being inducted in Islamabad Police while the government would be able to control crime rate on launch of new air patrolling unit in the federal capital.