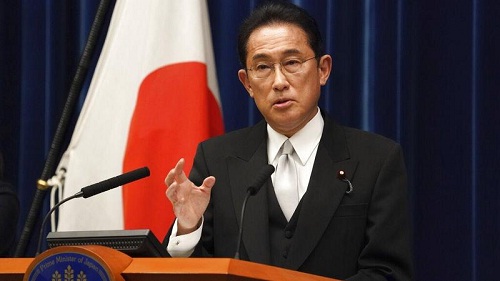 TOKYO, Oct 7 : Japanese Prime Minister Fumio Kishida on Thursday said he will fulfill his pledge to provide a “large-scale” package to stimulate the economy hit by the pandemic as the two upper house by-election campaigns began.

“I strongly feel that I need to carry out a large-scale economic stimulus or a large-scale coronavirus response, and I need people to judge whether to let me do so through elections,” Kishida said in a stump speech delivered in Shizuoka city for a candidate supported by his Liberal Democratic Party (LDP).

Kishida said the stimulus plan will be worth tens of trillions of yen and will provide support to companies affected by COVID-19.

The by-elections held in Shizuoka and Yamaguchi prefectures on Oct. 24 will allow voters to speak out their feelings about the new government launched by the prime minister this week, before a general election at the end of the month.

In Shizuoka Prefecture, the election is a contest between Yohei Wakabayashi, 49, a former Gotemba mayor supported by the LDP-led ruling coalition, Shinnosuke Yamazaki, 40, backed by the main opposition Constitutional Democratic Party of Japan, and Chika Suzuki, 50, with the backing from the Japanese Communist Party (JCP).

The election in Yamaguchi is a three-way race between Tsuneo Kitamura, a 66-year-old former trade ministry official backed by the ruling coalition, Kiyo Kawai, 61, of the JCP, and Hezumaryu, 30, a YouTuber acquiring support from a minor opposition party.

The by-election was held after the LDP’s Shigeki Iwai left his seat in the House of Councillors and failed in the election for the governor of Shizuoka in June, while LDP lawmaker Yoshimasa Hayashi from Yamaguchi vacated his seat to enter the upcoming House of Representatives election.