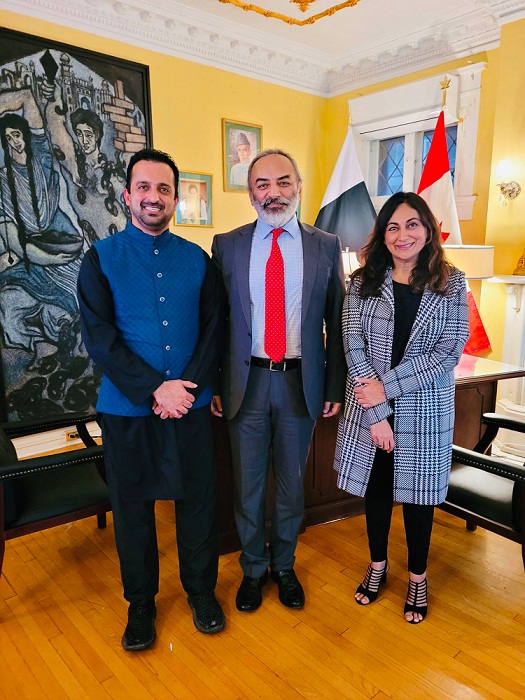 Otawa : Pakistan High Commissioner-designate to Canada Mr. Ameer Khurram Rathore has said that he plans to engage extensively with the Pakistani diaspora in Canada in coming days to create linkages and collaborations in both countries in the fields of commerce, investment, education and tourism.

He expressed these views while talking to Ms Sadaf Ebrahim, President of Canada Pakistan Association (CPA) National Capital Region and Syed Kashif Alamdar Vice President of Canada Pakistan Association who called on him to brief him on various initiatives taken by CPA in the field of community welfare, humanitarian work, cultural exchanges, promotion of education and tourism, particularly religious tourism in Pakistan after the opening of Kartarpur Corridor in 2019.

Ameer Khurram Rathore said the Pakistani Canadian organisations and associations were well-placed to promote educational and cultural linkages and promote bilateral trade and investment because of their wide outreach and networks in both countries. He said the inclusion of Pakistan in the Student Direct Stream (SDS) by Canadian authorities for fast-tracking visa applications of Pakistani students wanting to pursue higher studies in Canada was a welcome step and there was need for the Pakistani Canadian groups and bodies working in the field of education and consultancy to collaborate with partners in Pakistan to create understanding and awareness of the SDS scheme and the advantages it accrued to the prospective Pakistani students for acquiring higher education in Canada and pitching them for the high-end labour market in Pakistan, Canada and elsewhere in the world.