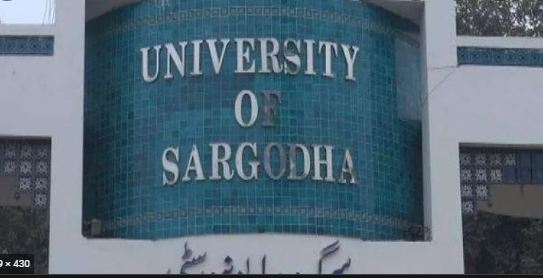 SARGODHA, SEPT 19 (DNA) – The University of Sargodha is facing unrest due to the unlawful actions taken by the temporary Vice Chancellor on additional charge, the paper learned.
The crisis has jeopardized the future of hundreds of teachers, staff, and students. Ad hocism prevails over almost all of the university’s major administrative positions. By chairing the Syndicate and Selections Boards, Vice Chancellor Dr. Shahid Munir violated the prescribed laws, rules, and regulations, according to the documents available to this scribe. According to the law and court rulings, the temporary VC appointed under section 12(9)  can only oversee the varsity’s day-to-day operations and cannot deal with policy issues.
The hastily called Syndicate meeting was intended to acquit all university officials who have been convicted or are under investigation, including Professor Ghulam Yaseen, Professor Ilyas Tariq, and former registrar Mudassar Kamran, who face penalties under the PEEDA Act, the Anti-Corruption Act, and the National Accountability Bureau, among others.
According to the minutes of the August 26 Syndicate meeting, Mr. Ilyas Tariq was given a second chance to prove his innocence in the harassment case after the previous Syndicate on May 19 declared him ineligible for any administrative position for three years. By law, the Syndicate cannot hear him once he has been convicted. However, he may file an appeal with the Ombudsman, and only the Chancellor has the legal authority to hear this case.
Similarly, an independent investigation was conducted three times under the PEEDA Act against Prof. Ghulam Yaseen, who is also facing an anti-corruption case. The inquiry committee, chaired by a neutral eminent person, Dr. Asif Ali Rao, vice chancellor of a public sector university, recommended penalising, but Dr. Shahid Munir, vice chancellor of the University of Jhang, ignored the recommendations in order to favor Ghulam Yasin, and formed a new committee. Furthermore, the VC replaced all senior administrative officers in the registrar’s office, legal cell, and examination department with junior officers in order to manipulate facts from investigations and other pending cases to achieve the desired results.
Documents also revealed that the VC requested the Secretary HED Punjab to withdraw the previous panel of eminent individuals for Syndicate membership. This is an attempt to make arbitrary decisions, which is a violation of the law and an abuse of power. Similarly, under the guise of the 2004 Recruitment Policy, the Vice Chancellor is erecting roadblocks to sabotage the case of appointment of permanent principal officers of the university. In such cases, the Chancellor and Cabinet have already approved an exemption from Recruitment Policy 2004. On the contrary, two Selection Boards conducted by him do not follow the policy while making recruitments himself.
In his application to the Governor/Chancellor, Dr. Muhammad Bashir, the University’s senior most administrative officer and Controller Examinations, stated that the examination office performed admirably well during the COVID-19 difficult period and saved the students’ academic year by introducing an online system with the help of other statutory bodies of the university. While we are still in COVID, the VC’s arbitrary transfers, which were not within his mandate under the rules, have created fear among students that they may face and suffer the consequences.
Eminent individuals and Chamber of Commerce officials have also expressed concern about the VC’s actions causing ongoing unrest among teachers, staff, and students.
The No. 1 teaching university in Pakistan, according to the prestigious THE 2022, is currently embroiled in a political battle over its future due to poor administration and ad hoc policies implemented by HED Punjab. The university faculty, staff, and citizens have petitioned the Governor/Chancellor, Chief Minister, and Secretary HED to appoint a senior officer as Pro Vice Chancellor or to make permanent appointments to the Vice Chancellor, Registrar, Treasurer, and other vacant positions at the University of Sargodha.
It should be noted that the aggrieved officers under PEEDA Act have been stalling the appointment of the Pro VC at the UOS.