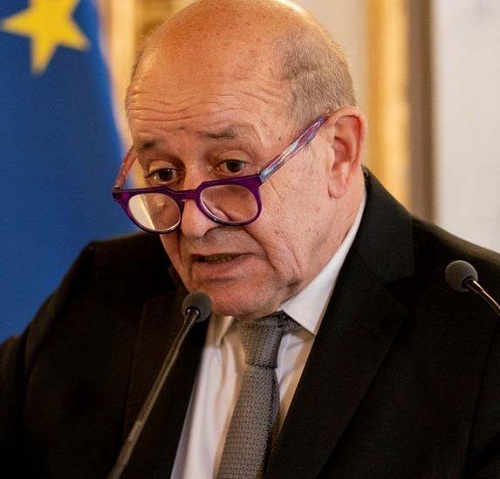 French Foreign Minister Darian accuses both countries  of duplicity,  a major breach of trust and contempt

PARIS: France’s foreign minister has accused Australia and the US of lying over a new security pact that prompted Paris to recall its ambassadors.

Jean-Yves Le Drian also accused the countries of “duplicity, a major breach of trust and contempt”.The pact, known as Aukus, thwarted a multibillion-dollar deal France had signed with Australia.

Australian Prime Minister Scott Morrison said he had acted in the country’s national interests. He insisted the French government “would have had every reason to know that we had deep and grave concerns” that the $37bn (£27bn) deal signed in 2016 – for France to build 12 conventional submarines – “was not going to meet our strategic interests”.”Of course it’s a matter of great disappointment to the French government, so I understand their disappointment,” he said. “But at the same time, Australia like any sovereign nation must always take decisions that are in our sovereign national defence interest.” The Aukus agreement – which also includes the UK – will see Australia being given the technology to build nuclear-powered submarines as a way of countering China’s influence in the contested South China Sea.

“The fact that for the first time in the history of relations between the United States and France we are recalling our ambassador for consultations is a serious political act, which shows the magnitude of the crisis that exists now between our countries,” he told France 2.

He said the ambassadors were being recalled to “re-evaluate the situation”. But he said France had seen “no need” to recall its ambassador to the UK, as he accused the country of “constant opportunism”. “Britain in this whole thing is a bit like the third wheel,” he said.

France was informed only hours before the public announcement was made earlier this week. In an interview with France 2 television on Saturday, Mr Le Drian said a “serious crisis” was in progress between the allies.

A White House official said the Biden administration regretted the move and would be engaged with France in the coming days to resolve their differences.

Speaking in Washington, Australian Foreign Minister Marise Payne said she understood the “disappointment” in France and hoped to work with the country to ensure it understood “the value we place on the bilateral relationship”.

A recall of ambassadors is highly unusual between allies, and it is believed to be the first time France has recalled envoys from the two countries. French diplomats in Washington had already cancelled a gala to celebrate ties between the US and France which was scheduled for Friday.