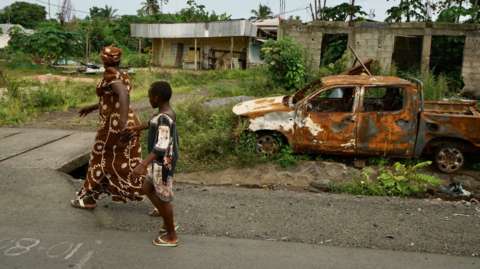 At least 10 soldiers from the Cameroonian army’s elite Rapid Intervention Battalion were reportedly killed in an ambush on Thursday in Bamessing, in the troubled North-West region.

A video posted on social media showed naked bodies of soldiers on the ground and two armoured vehicles that had been set on fire.

A separatist group has claimed responsibility.

Cameroonian army Gen Valère Nka, who is stationed in the region, confirmed the attack to the BBC but gave no details.

Seven soldiers were earlier killed overnight between Sunday and Monday in the Kumbo zone in the North-West region.

One of the separatist factions ordered a 15-day lockdown in the North-West and South-West regions.

These two English-speaking regions have been torn by separatist violence since 2017.

The  conflict has already killed more than 4,000 people and displaced tens of thousands others, according to the International Crisis Group.