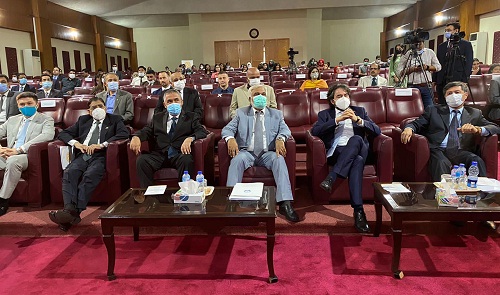 This Conference was organized to conclude the Six weeks On-Campus Internship Program for the Under-Grad Students of Bahria University which was organized by Center for Global & Strategic Studies (CGSS), Islamabad

ISLAMABAD:  An International Conference on “Significance of Regional Connectivity for Shared Prosperity: Opportunities and Prospects” was organized by Center for Global & Strategic Studies (CGSS), Islamabad. The aim of the Conference was to highlight the importance of regional integration between countries vis-à-vis socio-economic and cultural cooperation.Bahria University, Islamabad and Midas (Pvt) Limited were the collaborative partners for this Conference.

The Conference was well attended by the worthy Ambassadors of various countries to Pakistan and subject experts from Pakistan as well.

The Conference commenced by the remarks of Mr. Khalid Taimur Akram, Executive Director, Center for Global & Strategic Studies (CGSS), Islamabadwho explained the concept of the Conference. He discussed the significance of Central and South Asia connectivity. He stated that our aim is of connectivity with Eurasia and ASEAN countries. He thanked the worthy Ambassadors and the students of Bahria University for their contributions.

Prof. Dr. Adam Saud, Dean, Faculty of Humanities and Social Sciences, BahriaUniversity, Islamabad in his welcomeremarks stated that regional connectivity is one of the most important themesand it is the future of the world. The future belongs to this region i.e., Asia and regional connectivity will bring development and prosperity for the whole region.

Mr. Ashfaq Ahmed Gondal, Former Federal Secretary of Information and Vice-President (Federal Region), CGSS in his opening remarks stated that connectivity and interdependence leads to independence of nations. Connectivity is the key and without that the regional issues cannot be resolved. Connectivity is important for peace and prosperity.

Yerzhan Kistafin, Ambassador of the Republic of Kazakhstan to Pakistandiscussed Kazakhstan inclusive foreign policy contours. He stated that connectivity is very important as COVID-19 has affected our economies and regional connectivity is the key to revive our economies and achieve the ultimate goal.Kazakhstan depends on natural resources. Kazakhstan pays special attention to development of communication and transportation routes. Kazakhstan has well developed infrastructure, corridors and railway links. Kazakhstan is willing to provide transit capabilities to Pakistan to enter European and Central Asian markets. Kazakhstan is an attractive country for air corridors development and it is important to develop favorable conditions for foreign investment.

Aybek Arif Usmanov, Ambassador of the Republic of Uzbekistan to Pakistandiscussed the role of Uzbekistan in reinvigorating the phenomena of academic cooperation into regionalism. He stated that this era is of understanding and cooperation. The focus of our leaders is on confidence building measures, security and stability for economic integration between regional countries. These initiatives have consequently developed an era of trust and integration. South Asia is the first neighboring region of Central Asia and we all are a part of this development. Pakistan is considered as the main partner of Central Asia and is considered as the main hub to provide access for Central Asia to seaports of Karachi and Gwadar. He stated that our next step towards connectivity is the railway link coming from Uzbekistan to Kabul, Jalalabad and Peshawar.

Jawad Majid, President, Summit Bankhighlighted economic potential of BRI and the opportunities for regional states. This century is about economic growth of South East Asia and Asia. Belt & Road Initiative (BRI) is a transcontinental long-term policy and investment program which aims at infrastructure development and acceleration of the economic integration of countries along the route of historic Silk Road.

Mustafa Yurdakul, Ambassador of the Republic of Turkey to Pakistanstated that Turkey has made billion dollars investment for the connectivity projects that also includes natural gas pipeline. Since 1980, Turkey has invested in connectivity through Europe and Asia because of Turkey’s significant geographical location. He also discussed the concept of Islamophobia and appreciated the steps of Prime Minister Imran Khan to promote religious stance.

Vice-Admiral Asif Humayon HI(M), (Retd), Former Vice-Chief of Naval Staff (VCNS) presented speech on “Pakistan’s Maritime Assets: Opportunities under Gwadar Port and Opportunities for Regional Countries”. He stated that cooperation in aquaculture needs to be developed. Regarding the Afghan issue, he stated that peace is necessary for development in Central Asia and to entertain benefits from CPEC. Gwadar as part of CPEC can transform into a new Dubai.

Nguyen Tien Phong, Ambassador of Vietnam to Pakistan presented speech on “Vietnam’s robust economic model: Prospects for cooperation with Pakistan and Role in ASEAN”. He discussed the Vietnam’s economic model. He stated that Vietnam’s aim is to promote integration and increase trade with the regional countries as economies rely on each other for mutual benefit and win-win situation for all. Vietnam is an active partner of many regional organizations. He also stated that ASEAN plays an important role in Asia and Vietnam is a proactive member of it.

Ambassador (p) Gheorghe Savuica, President and Founder, Romanian Institute for Europe-Asia Studies (IRSEA), Bucharest, Romania presented speech on “Regional Cooperation and Opportunities for Pakistan-Romania Academic Connectivity”. He discussed about the significance of regional cooperation and focused on the promotion of national interest and people-to-people connectivity. He also focused on cultural and academic cooperation. Discussing about Pakistan and Romania relations, he states that both are working for signing an MOU for cooperation.

The Conference concluded by the speech of Rear Admiral Naveed Ahmed Rizvi (Retd), Director General, Bahira University, Islamabad. He stated that this Conference is an opportunity forInternational Relations students to handle the challenges in the contemporary era. He stated that technology can play an important role for the connectivity. Bahria University have faculty development programswhich can serve as the better solution for tomorrow problems. He thanks CGSS andBahia university for 6 weeksinternship program and organizing the conference. He said that the ambassadorsoffer a fresh perspective for the students for better future.

The Conference concluded with Certificate Distribution Ceremony for the interns, guest speakers who delivered lectures during the internship program, faculty members of Bahria University and the management of CGSS.