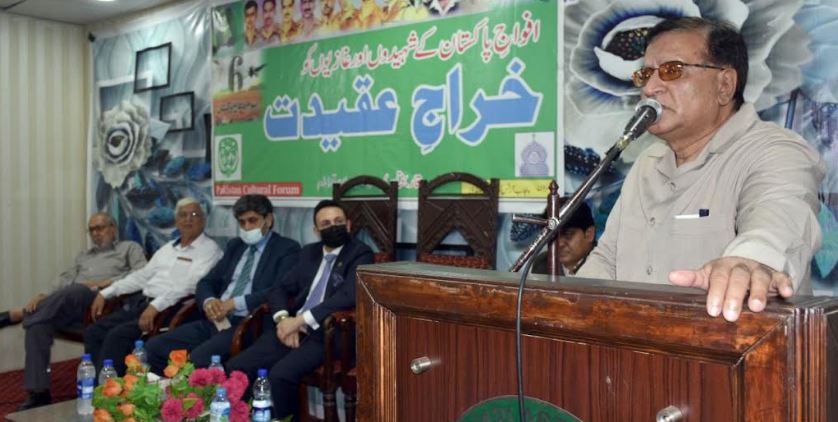 ISLAMABAD, SEPT 12 (DNA) – Sardar Yasir Ilyas, President, Islamabad Chamber of Commerce and Industry, said that he had briefed Prime Minister Imran Khan and President Dr. Arif Alvi on the problems faced by the traders at his Chamber’s function last week.  He hoped that the long standing problems faced by the traders and industrialists of Islamabad would be resolved soon. He expressed these views in Islamabad at a reception hosted by Ahsan Zafar Bakhtawari, former Vice President, Islamabad Chamber of Commerce and Industry in honor of Elected President of Abpara Traders Welfare Association Ajmal Baloch and Founder Group ICCI, Sardar Yasir Ilyas said that he has raised the issue of EOs by FBR  in shops across the country in front of Prime Minister Imran Khan.

In his speech he had said that the business community was in a state of panic due to these measures and these measures would not increase the revenue but would reduce the trend of investment in the country. Mian Akram Farid, Chairman, Founder Group, said that the business community of Islamabad was moving ahead in full swing in the election campaign. He said that if the intention and faith were right, the destination would be found automatically.

Zafar Bakhtawari, former president ICCI and secretary general of the United Business Group, said in his address that businessmen should show full unity in their ranks.  Problems can be solved. He advised all the candidates that they have an opportunity to reach out to the business community and meet them and they should avail this opportunity. In his address, Khalid Javed, former President ICCI, emphasized the need to highlight unity and harmony in the business community, saying that only through our unity can we solve our problems as Ajmal Baloch has done for many years.  Standing with us in the historic struggle has raised the voice for the rights of traders.

Former President of ICCI Khalid Iqbal Malik said that Pakistani forces have made great sacrifices to eradicate terrorism. Ejaz Abbasi, former president ICCI, said in his address that the Founder Group would win the elections on September 16 by a landslide based on its service and the business community of Islamabad would once again express its full confidence.  He said that all the friends would be represented in the chamber on the basis of justice and merit.

Ajmal Baloch, newly elected president of Aabpara Market Traders Welfare Association, said in his address that he has played his full role in reviving the business of Waziristan traders besides Islamabad traders.  He said that he has endured the hardships of jail for the rights of his traders and will not spare any sacrifice for their rights in future. Tariq Sadiq, former president ICCI,said in his address that the Founder Group has been serving traders and industrialists for the last 35 years and would continue to do so with the support of traders. Sardar Tahir, President, Islamabad Estate Agents Association, said that all the real estate agents of Islamabad are fully with the Founder Group and will play a vital role in its success.

Former Vice President ICCI,  Ahsan Zafar Bakhtawari in his address said that on the day of polling the voters of the market which got the highest number of votes will be awarded Gold Medal, Silver Medal and Bronze Middle in a grand ceremony.  On polling day, the entire business community should leave their homes and offices and use their time for polling. Jamshed Akhtar Sheikh, Fahim Khan, Imtiaz Abbasi, Malik Shabbir Awan, Chaudhry Muhammad Ali, Fasihullah Khan, Khalid Mahmood Gujjar, Akhtar Hussain Abbasi, Khalid Chaudhry and Babar Chaudhry also addressed the function.