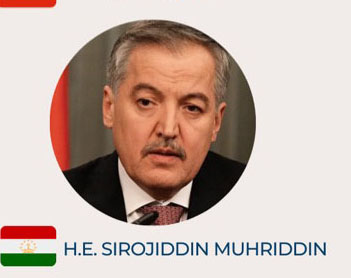 Sirojiddin Muhriddin stressed that Tajikistan will support only the government, which will include all ethnic groups, including the Tajiks of Afghanistan.

“The world community has not been able to restore order in Afghanistan for 20 years and has left tens of thousands of terrorists in this country as a “legacy”. This country has become a hotbed of chaos. What should Tajikistan, which has a long and vulnerable border with this country, do in this situation? ” the Foreign Minister added.

In his speech, Sirojiddin Muhriddin also touched upon the ongoing fighting in Panjshir and said that the Taliban used aircraft in attacks on this province with the help of third countries, killing a large number of ethnic Tajiks.

In this regard, I call on the international community to influence the Taliban and help find a political solution to the current crisis,” the Tajik minister said.

The online meeting was initiated by the United States and Germany. It was attended by the Foreign Ministers of Australia, Bahrain, Canada, France, India, Italy, Japan, Kuwait, Norway, Pakistan, Qatar, the Republic of Korea, Saudi Arabia, Spain, Turkey, Turkmenistan, the United Arab Emirates, the United Kingdom, as well as the leaders of the EU, NATO and the United Nations.