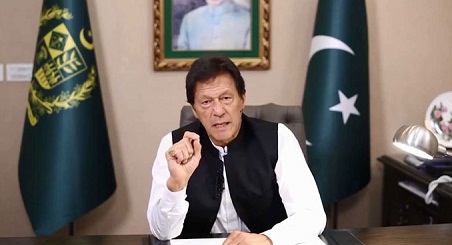 The PM was speaking at the Sialkot-Kharian motorway groundbreaking ceremony

The prime minister was speaking at the Sialkot-Kharian motorway groundbreaking ceremony. He said Pakistan needed to generate wealth to pay off its loans, adding that it was a must for the country to increase industrialisation.

The premier told Fawad Chaudhry that he should highlight that “we are building three times more roads than the previous government”.

“And we are building them at low cost as well,” he said. “Because commission from these roads are not being used to buy flats in London.”

Speaking to the stakeholders present at the ceremony, the prime minister urged them to tell him personally whenever they face hurdles in construction and other projects.

“Our first priority is to ensure ease of doing business,” he explained.

Explaining the benefits of the motorway, the prime minister recalled how the Swat motorway built by the PTI-led KP government had increased private investment.

“At the time of Eid, 2.7mn cars travelled on the Swat motorway,” revealed the prime minister. “Imagine the benefit that would have brought [to local industries]. And whenever traffic [of vehicles increases on such projects] then private investment flows in.”

The prime minister said he would ensure the Sialkot-Kharian motorway is built through public-private partnership, adding that this would ensure the public development fund is saved so that it can be spent on education and health.

PM Imran Khan said Pakistan had a large youth population which it should use to its advantage. “We can convert our huge population into an advantage for us as well,” he said. “Only if we work smartly.”

PM Khan said if the northern areas of Gilgit-Baltistan were connected with other areas, it would boost tourism to unprecedented levels in Pakistan.

“More tourists in the country would mean more inflow of dollars into Pakistan,” he said. “This, in turn, would improve the exchange rate.”