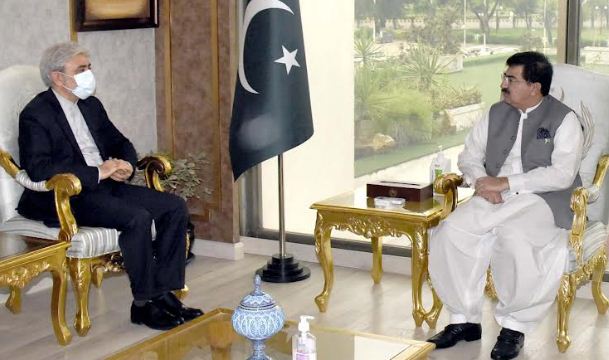 Chairman Senate Sadiq Sanjrani noted that Pakistan and Iran strive for the development and prosperity of the region. “Pakistan and Iran are tied with a strong bond of religious, cultural, and neighbourly relations which provide an impetus for enhancing bilateral relations”, he added.  The Chairman Senate observed that international cooperation between the two countries is meritorious. Both the countries have similar perceptions and views on important regional and international issues, the chairman further added. The people and the government of Pakistan highly value its brotherly relations with Iran, he maintained. The Chairman underscored that the fraternal ties between Pakistan and Iran should be further cemented and taken to new heights.

While endorsing the views of Chairman Senate, the Iranian Ambassador said that bilateral cooperation between the two countries needs to be further strengthened.

The meeting also discussed discontinuity of electricity in Makran Division, especially in Gwadar. The Senate Chairman thanked the Government of Iran for restoring  power supply to Gwadar and Makran division. He said that the region’s people were facing difficulties due to power outages, and the people now took a sigh of relief and have been relieved by power restoration. Senator Kauda Babar thanked the Chairman Senate and the Ambassador of Iran for their cooperation in this regard. “Chairman Senate’s keen and personal interest on the matter helped in resolving the issue,” Senator Kauda Babar highlighted.  Referring to the forthcoming visit of the Chairman Senate to Iran, the Ambassador briefed the Chairman Senate on different aspects of the visit.

“Tehran is a friendly country, and this upcoming visit to Iran would help in further enhancing bilateral cooperation”, Sanjrani remarked.