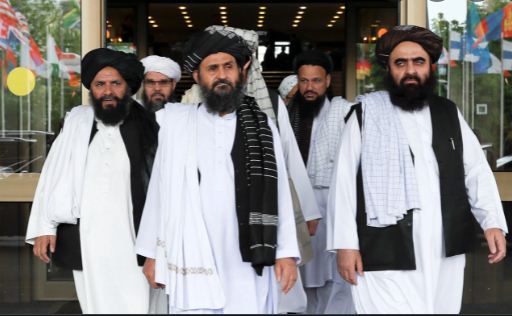 BEIJING: China told a visiting Taliban delegation on Wednesday it expected the insurgent group to play an important role in ending Afghanistan’s war and rebuilding the country, the Chinese foreign ministry said.

Nine Taliban representatives met Foreign Minister Wang Yi in the northern Chinese city of Tianjin on a two-day visit during which the peace process and security issues were discussed, a Taliban spokesperson said.

Wang said the Taliban are expected to “play an important role in the process of peaceful reconciliation and reconstruction in Afghanistan”, according to a readout of the meeting from the foreign ministry.

He also said that he hoped the Taliban would crack down on the East Turkestan Islamic Movement (ETIM) as it was a “direct threat to China’s national security”, according to the readout, referring to a group China says is active in the Xinjiang region in China’s far west.

The Chinese foreign minister said after the hasty withdrawal by the United States troops and other NATO (North Atlantic Treaty Organization) allies, the Afghan people were faced with new opportunities of grasping the development of their own nation in their own hands.

“Afghanistan is an important military power and China is ready to play a constructive role in peace and reconciliation process of Afghanistan,” Wang Yi said.

During the talks, Wang Yi hoped that the relevant sides in Afghanistan could go ahead with peace talks, follow an inclusive policy. The relevant factions and groups in Afghanistan should implement the principle of Afghan-owned and Afghan-led approach and strive for substantive outcomes at an early date and build a political architecture suited to its own national conditions, he added.

He expressed the hope that Taliban could draw a clear line between themselves and the ETIM, which would create a favourable condition to eradicating terrorism.

Mullah Baradar expressed appreciation to the Chinese side and said China was a trustworthy friend.

The head of Afghan Taliban delegation appreciated China’s fair and positive role in the reconciliation process in Afghanistan and said Afghanistan had the sincerity in reaching reconciliation and would like to build architecture that was acceptable to all factions.

He said Afghanistan would ensure rights of women and children, and added, “The Afghan people will not allow anyone to use the territory to do things that would undermine interests of its people.”

“The Afghan Taliban would also create an enabling environment for incoming investment and would make relevant efforts in this regard,” he added

The Taliban visit to China was likely to further cement the insurgent group’s recognition on the international stage at a sensitive time even as violence increases in Afghanistan. The militants have a political office in Qatar where peace talks are taking place and this month sent representatives to Iran where they had meetings with an Afghan government delegation.

“Politics, economy and issues related to the security of both countries and the current situation of Afghanistan and the peace process were discussed in the meetings,” Taliban spokesperson Mohammed Naeem tweeted about the China visit.