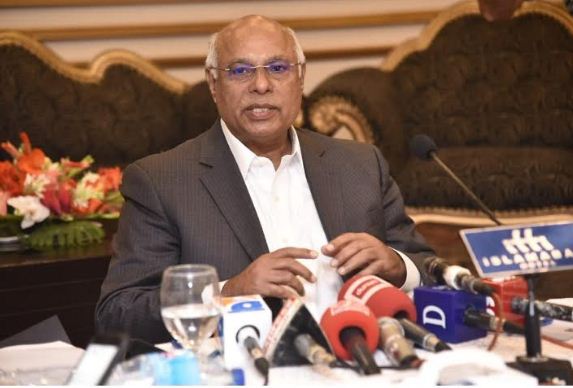 Islamabad: Pakistani-American, Hafeez Uz Rehman Choudhary, who has filed a petition in the Supreme Court on Presidential form of government, on Sunday said that only Presidential form of government could solve Pakistan’s problems. Parliamentary form of government is a system of minority rule. He said that Pakistan’s poor people  could get rid of hereditary style of politics and groups and bands indulging in politics of blackmail only through this system. And this system could put Pakistan on the path of development and progress, which is a voice coming from the hearts of Pakistani people.

He made these remarks in a press conference on Sunday, “Only through this system we can get rid of politics of blackmail and politics of groups and bands indulging in make or break politics at the constituency level” he said.He said that he had filed a petition in the Supreme Court for seeking the repeal of parliamentary form of government in the country. The petition, he said, was filed through his lawyer and constitutional expert, Khalid Abbas Khan. He said he has made federation of Pakistan, prime minister, governors and chief ministers of four provinces responded in the petition.

The petition is pending in the Supreme Court and he would not file an application of the immediate hearing of the petition.With the introduction of parliamentary form of government the people of Pakistan have been deprived of political justice, which has been promised under the provisions of the constitution. He said that parliamentary system has caused instability in the country.He said that Prime Minister Imran Khan should be directed to hold a referendum on national in which “Yes” or “No” vote should be sought from the people and country’s political system should be restructured in the light of the result of the referendum.

He said that People of Pakistan had been deprived of political justice which had been promised by article 2(a) of the constitution.He said that it was because of parliamentary form of government that party will less than majority vote have been ruling the country since 2008. He said that in 2008, 2013 and 2018 the ruling party received 25. 6, 32.7 and 31.4 percent vote respectively, which mean they didn’t represent the majority of Pakistani people.

He said that if in a country people are not getting political justice, they would also not get social and economic justice as a consequence. Narrating the history of Pakistan’s constitutional development, He said that at the time independence, India Independence Act 1947 made it mandatory on Pakistan to adopt Government of India Act 1935 as provisional constitution of the country. In this provisional constitution certain provisions were missing which were necessary for running the governmental affairs of an independent country. Therefore a constituent assembly came into existence to prepare a new constitution. The constitution making process remained delayed for 9 years which was a very unfortunate situation. Intra-assembly fights between assembly member, political tussles and lack of priority were the reasons behind this delay. He said that the constitutional process remained marred in palace intrigues, political squabbles and this led to dissolution of successive cabinets.

The members of the assembly and political leaders remained focused on petty issues related to their constituency politics. He said that the absence of a constitution led to dismemberment of Pakistan in 1971. He said that 1956 constitution and 1962 constitution, both were illegitimate because in the case of former approval was given by a nominated assembly and in case of later approval was given by a dictator. He said that there were structural flaws in the 1973 constitution, and it Was because of those structural flaws that 1977, 1999 and 2007 political crisis hit the country. He said that the lawyer movement which led to the restoration of Supreme court also led to restoration of Pakistan’s image abroad. As a result Supreme Court took suo moto notice of large number of corruption cases under article 184(3) and it was under this article that Supreme Court issued a directive against former Prime Minister and expelled him from office.

This resulted in the provision of political justice to the people of Pakistan. This opened the path for judicial action against big corruption cases. He said that under Presidential form of government people from every province get the chance to obtain votes according to their own standards. This will pave the way for putting an end to chaos and anarchy which provide basis to religious and provincial disharmony. He said that the 25 percent reserved seats in the national assembly are a form of corruption and this provision deprived the people of Pakistan of political justice. In Presidential form of government there would be no special seats in the parliament. Similarly indirect election of senators also deprives people of their political rights as their vote is not included in the process. In a presidential form of government senators are elected directly by popular vote. Senate is a federal institution and it is absolutely necessary to run senate in a fair manner to strengthen the federation.  Our federation is weak because our senate has less power. In presidential system senate will be more powerful and it will keep the federation strong.