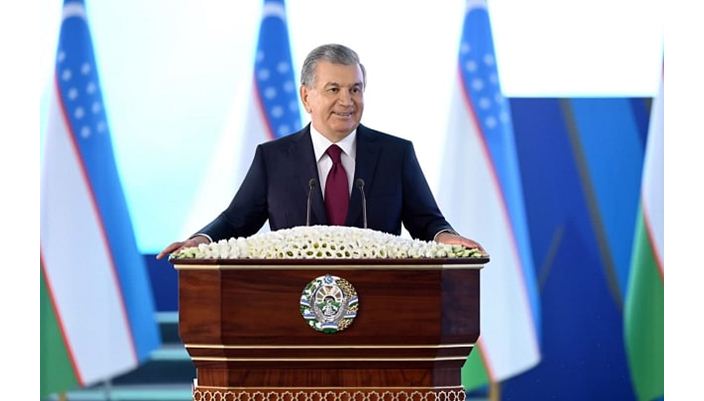 On June 30, President Shavkat Mirziyoyev visited the Forum of Youth and Students of Uzbekistan.

The Botanical Garden where the forum is held is festively decorated. Exhibitions and demonstrations reflecting the achievements of young people in the fields of science, technology, literature and art have been organized.

The head of state walked around these exhibitions and examined the inventions, skills and artistic performances of young people. He talked to them and wished them success in their reading and research.

The President came to the square and congratulated all the young men and women on June 30 – Youth Day.

“In our country, priority is given to the education, rights and interests of young people. In this regard, a separate state organization – the Agency for Youth Affairs was established. In addition, the Youth Union has more than thirty non-governmental organizations. In all cities and districts, the State Program “Youth – Our Future”, “Five Initiatives” covering various areas are being implemented.

The fact that this year has been declared the Year of Youth Support and Public Health in our country is also a bright manifestation of the attention paid to young people.

There are two most important directions in the youth policy of the President: the first is to provide them with modern education, and the second is to ensure youth employment. This goal is at the heart of the reforms, initiatives and new systems of recent years.

In particular, in order to develop the knowledge and skills of young people, a new system of Presidential schools, creative and specialized schools has been created. In general, attention to all schools, encouragement and respect for teachers has increased. The desire for knowledge increases in the younger generation.

Last year, our educated and intelligent youth won 4 gold, 18 silver and 29 bronze medals at the International Science Olympiads. All 96 students who graduated from the Presidential Schools this year entered the prestigious foreign universities ahead of schedule on a grant basis.

In line with the growing demand for knowledge-hungry youth, the number of higher education institutions has been increased to 127, and branches of 26 foreign universities have been opened. In the last 5 years, the quota for admission to higher education has been tripled, reaching 182,000 this year. This means that the total coverage will be 28 percent. Four years ago, the figure was only 9 percent.

The increase in state grants from 21,000 to 47,000 and the allocation of special grants for 2,000 girls from needy families to enter higher education have brought joy to thousands of families.

This year, another higher education institution, Yangi Uzbekistan University, was established. In the new academic year, 300 young people will be admitted to it.

Even when it comes to employment, it can be seen that attention and care for young people has become a priority. The number of entrepreneurs under the age of 30 has increased fivefold in the last four years, to more than 500,000.

As a result of practical work, over the past eight months, 300 billion soums have been allocated to solve the problems of 430,000 young people included in the “youth book”. In particular, the contract was paid to more than 2,000 students from families with children in the “iron notebook”, the presidential press service said.

Starting this year, a procedure has been introduced for employers to fully reimburse the amount of social tax calculated for their employees under the age of 25 from the budget. In addition, the introduction of a subsidy of 500,000 soums for 6 months for internships in vocational schools and technical colleges was a great incentive for young people and their parents.

This year, 2.3 trillion soums of soft loans have been allocated for entrepreneurial projects of more than 92,000 boys and girls. 50,000 new jobs have been created within the framework of 3,000 projects in 186 youth industrial and business zones organized in the regions.

A group of active and progressive youth, who with their success in their profession and social life, the creative and intellectual potential is an example for their peers, makes a worthy contribution to the prosperity of the country and increasing its international prestige, was awarded orders and medals by the decree of the President of the Republic of Uzbekistan of 29 June.

The Head of the state solemnly presented the awards at the festive event.

The awardees thanked the President for the high trust and attention, opportunities created for the youth, and noted that they will actively continue their activities, make every effort to achieve even better results and justify the confidence of the state.

The Head of the state talked with young people gathered at the forum. He supported the opinions and initiatives expressed by youth, gave appropriate instructions to responsible persons.

“I am glad to see that the attention we pay to young people is yielding results. There is not a single sphere in which young people do not achieve success. If we open the way for young people and support them, we will achieve even greater results. The power that I most trust, the greatest wealth of our country is the youth”, the President said.

The event ended with a large concert program.