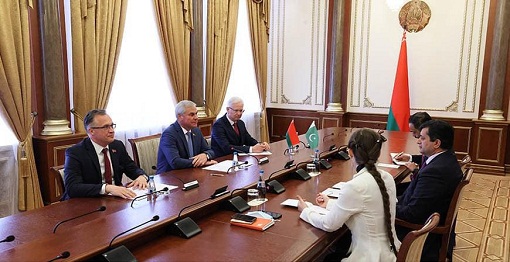 MINSK: Ambassador Sajjad Haider Khan called on the Chairman of Belarusian House of Representatives H.E. Mr. Andreichenko Vladimir this morning. The meeting was also attended by the Chairperson of the Standing Commission on International Affairs/Head of Pakistan-Belarus Friendship Group H.E. Mr. Savinykh Andrei.

Welcoming the Ambassador to Belarus, the honourable Chairman recalled his last visit to Pakistan in 2017, highlighted the potential for bilateral cooperation, expressed satisfaction over the growing trade and economic relations which crossed US $ 52 million in 2020 and reiterated his invitation to the Parliamentary delegation from Pakistan headed by the Speaker of National Assembly during this year.

Appreciating the cordial relations between the two countries, potential for growth in trade, people to people contact, educational collaboration, defence and cultural cooperation, the Ambassador handed over an invitation on behalf of H.E. Mr. Asad Qaiser, Speaker of the National Assembly to the Chairman to visit Pakistan at mutually convenient dates.