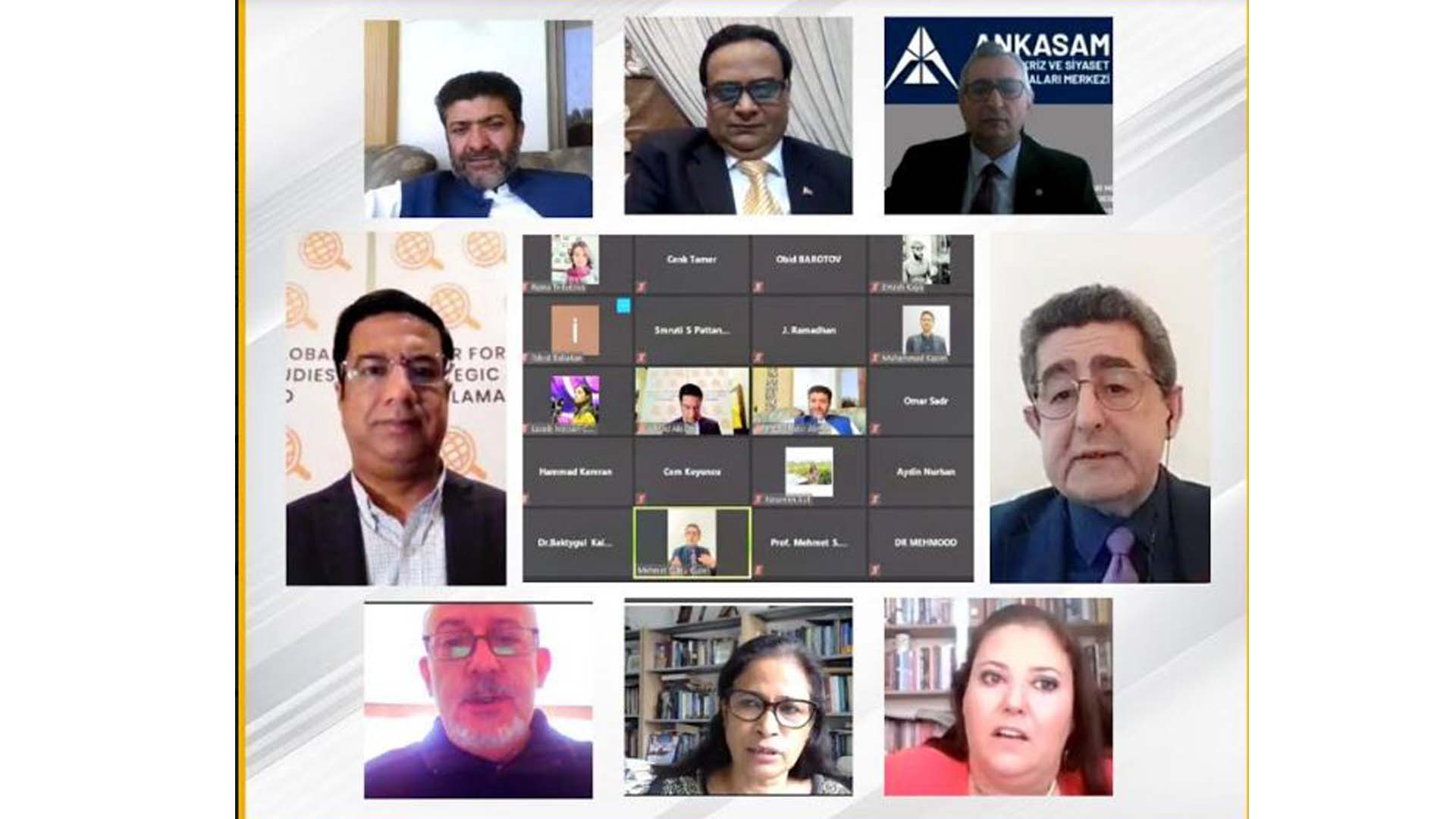 ISLAMABAD: Prof. Mehmet SukruGuzel, ANKASAM Representation in Geneva (Switzerland) has stated that from a terrorist organization to a Non-state armed group there must be some changing. He elaborated in detail about the United Nations Security Council (UNSC) resolutions on Afghanistan, Taliban and US-Taliban peace deal of 2020. Mr. Mehmet stated that Taliban accepted the binding of UNSC resolutions. However, the legal team of Afghanistan are making mistakes by not fulfilling the agreed resolutions of the accord.

He expressed these views during the Second Session of the Two-Day Online International Conference on ‘’ The Rise of Asian Geopolitics and Terrorism at the Threshold’’ Conducted by Ankara Center for Crisis and Policy Research (ANKASAM),Turkey

While briefing on two preambles of UNSC, Prof. Mehmet explained that in first preamble the Taliban are defined as the terrorist organizations and in second preamble, Para 6, they are put into the peace negotiation. He concluding by stating that the Taliban need to understand and have to obey the UNSC resolutions as it is binding and they have to fulfill their responsibility for a better solution.

Asst. Prof Ali BilginVarlik, Colonel ®, Istanbul ArelUniveristy (Turkey) discussed ‘’Afghanistan, Towards Reconciliation or a failed state?’’. He gave brief presentation on the topic and discussed historical and contemporary perspective of Afghanistan. He stated that Afghanistan has been a country of power struggle between the regional and global powers. Therefore, the reconciliation process will change the position of country. There are geostrategic, geopolitics, energy-politics and cultural dimensions of Afghanistan. He stated that it can be consider a potential country as it has colorful human geography. Mr. Ali comprehensively discussed the economic indicators of Afghanistan. He stated that the all the fundamental indicators are interrelated in Afghanistan. Therefore,themain indicators according to him will be the vacuum authority as US withdrawal its forces. Mr. Ali stated that in the absence of secular political life, a state always fails. Therefore, with the rise of Taliban,irreversible conditions will likely to prevail. He concluded by saying that complete US withdrawal would make Afghanistan a total fail state. There would be consequences of the withdrawal, however, can provide short to medium-term benefits.Regional instability may hamper China’s BRI or create internal issues that may trigger security problems for adjacent countries.

Dr. Mehmood ul Hassan Khan, Member Board of Experts, CGSS, (Pakistan) talked about ’Central Asia and Afghanistan in the Rise of Asian Geopolitics’. He explained in detail about the changing dynamics of the region. He gave profound analysis on the US incumbent government’spolicies regarding the complete withdrawal. Dr. Mehmood highlighted the role of Pakistan to support the Afghan cause and playing a pivotal role in the socio-economic reconstruction of Afghanistan.He explained that dream of regional connectivity has been battling out in Afghanistan during last decades.

Prof. Dr. Shabir Ahmed Khan, Member Board of Experts, CGSS & Director, Area Study Center (Pakistan) shared analysis on ‘’peace prospects in Afghanistan’’. While elaborating the prospects, Prof. Shabir stated thatthe Doha peace process has provided historical opportunities to the Afghans to reach a consensus for power sharing and achieve sustainable peace. Dr. Shabir elaboratedthree main options for resolving the power sharing issue. First, the incumbent government should become a part of the Taliban dominant government as an inclusive political settlement with modifications in present constitution not entirely replacing it with new one. Second, an interim setup in consensus through intra-Afghan negotiation for a specific period followed by election. Third, Taliban become part of the current government. Dr. Shabbir stated that among these options, the third one seems quite difficult as the emboldened Taliban may not opt for becoming part of the current government. According to Dr. Shabbir, Taliban are inspired by forcing US/NATO to come to negotiations.  They consider the US/NATO and Kabul regime intend to win a war on table which they have lost on grounds. Therefore, Taliban seems not averse to first and second options. Prof. Shabbir, while concluding his speech stated if any of these options agreed upon by the Afghan new political setup and ceasefire to end the violence, shall be declared and practiced upon simultaneously. It is obvious that without reaching to a consensus on a new political setup there will be no end to violence.

Earlier, Khalid TaimurAkram, Executive Director, Center for Global & Strategic Studies (CGSS), Session Chairperson and Moderator, extended his appreciation and gratitude for the Ankara Center for Crisis and Policy Research (ANKASAM) for timely organizing the conference and highlighting crucial matters of concern for the international community.

Khalid during his speech on ‘’Central Asia, Pakistanand Afghanistan in the Rise of Asian Geopolitics’’ briefly discussed the significant imperatives. He stated that regional connectivity is the main element of changing states’ alignments and partnerships. In this multipolar world, the states are more inclined to cooperate and, therefore, avoid confrontations as it hampers economic development, peace and security. Mr. Taimur gave his analysis on the major shifts in the Asian geopolitics. He stated that with the rise of Asian geopolitics, different aspects of cooperation have emerged. Wider regional collaborations and realignments are now shaping bilateral or multilateral relations among countries. He comprehensivelyhighlighted the role of Turkey and Central Asian states in the socio-economicdevelopment of Afghanistan and praised their extensive support to bring peace in to region.Mr. Khalid stated that the Afghan endgame is now precipitating significant re-alignments and repositioning by major powers at the regional level and beyond.Mr. Taimur also suggested three main aspects related to the comprehensive work in the Afghan peace process that can be arranged in three areas.

While concluding, Mr. Khalid stated that the cooperation that began with economic assistance can lead to partnership and collaboration in many other domains. Therefore, exploring grounds for joint ventures and enhanced cultural exchanges would curtail differences and prejudices, increase people-to-people contacts, and benefit all states.