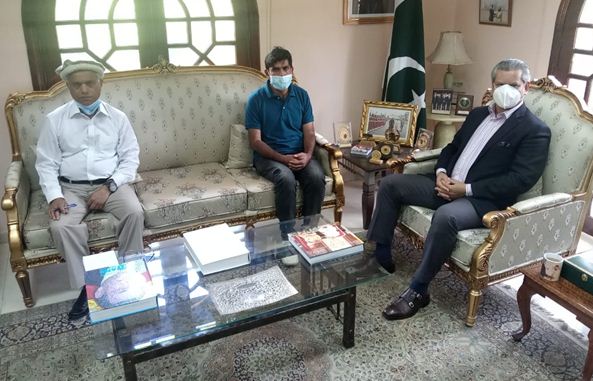 It may be mentioned here that brother of Dr. Ikram had sent a plea to Pakistani mission in Rabat asking for help. In his plea he had mentioned that his brother Dr. Ikram Ullah (Ph.D), national of Pakistan with passport ID BU1324122 was held hostage for the last two weeks at the residence of his now ex-wife Wiam El Alami daughter of Ahmed Bin Mohammed and Fatiha Bint Mohammed at her parent’s residence located at 65 MARJANE 1 TRANCHE 1 MEKNES.

They were married in August 2019 at Morocco with the consent and blessings of their parents at Wiam’s residence in an intimate family gathering. Their marriage was registered at Morroco.  After marriage Dr. Ikram went to China to continue his Post Doctoral research.

Later, Ikram and his wife visited Ikram’s parents in Pakistan in Feb 2020. After spending some days here, his wife went to Morocco to see her parents. After that, lockdown started in result of Covid-19.Since then, Feb-March 2020 his wife was in Morocco and Ikram in Pakistan.-

Last month Dr. Ikram flew to Morocco as flights resumed and he got two months visa from Morocco embassy after lot of effort to meet his wife and also to attend final marriage ceremony which was postponed last time due to visa issues. After three days once he reached there, Wiam and her family closed internet on him, took away his passport, return ticket, held him hostage, kept him in seclusion, mentally tortured him and demanded divorce to which he conceded.

His brother further narrated that somehow, he got internet and contacted his friends and family to report the matter in the mission to rescue him. Our last and only contact with him since he left for Morocco was on last Thursday, 6th of May 2021. He was terrified and scared to the core. He told us that they had taken divorce from him on Quran and wanted him to appear in court for the same to which he agreed.

He told us that he will contact us after that hearing in the court but he didn’t. Since then, we haven’t heard from him. We are very much concerned about his safety and life. We want immediate intervention of our mission in Morocco to take up the matter with Moroccan authorities to rescue him and take him out for his safe return to his family in Pakistan, the plea concluded.

Upon this letter, the Pakistan embassy contacted the in-laws and wife of the doctor and asked them to free him. Upon refusal, the Pakistan mission started weighing all its legal options. As a final resort, doctor was released when he told the captives that Pakistani embassy team along with police force was on its way to Meknes.

Dr. Ikram in his video message thanked the Pakistani embassy staff and especially Ambassador Hamid for quick action. He said the way Ambassador took personal interest in this matter is a clear manifestation of his earnest desire to help Pakistani Diaspora and those trapped in difficult situations like him.