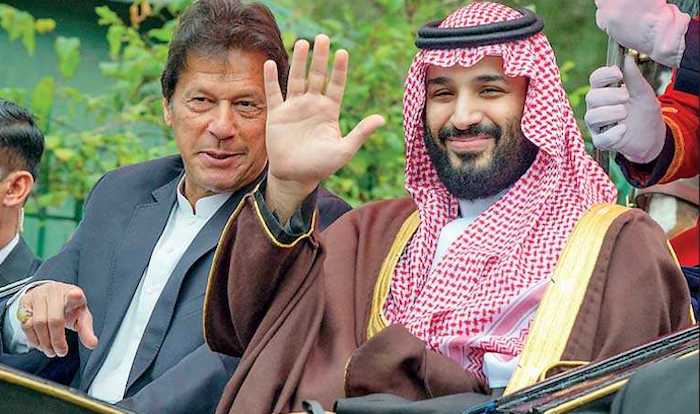 Many vibrant and transactional features have marked Pakistan’s significant and friendly relations with Saudi Arabia. In this regard, the most prominent features are economic and strategic ones.Moreover, there is also a qualitative dimension of the relationship between both Islamic states. Pakistan always has value its diplomatic, strategic, and economic ties with other Islamiccountries, especially in the Middle East and Gulf region. Pakistan is the home of the world’s second-largest Muslim population. A nuclear-armed and strategically strong nation is promoting peace and cooperation among Muslim countries. Therefore, Saudi Arabia is fundamentally associated with Pakistan in many dimensions. In this context, the article aims to highlight the importantcontours of the Saudi-Pakistan relationship. The study also provides a brief analysis of Pakistan’s strategic partnership with the Saudi Kingdom and outcomes of the mutuallybeneficial partnership.

Saudi Arabia was among the first countries to acknowledge Pakistan’s unique position in the Islamic world. Four years after the formation of Pakistan, both countries signed the Treaty of Friendship. Saudi Arabia’s pivot to Pakistan was that it is a strategically powerful nation and inclined towards facilitating regional peace and security. The changing dynamics of regional affairs and the shared identity of a nation formed by an Islamic character resulted as a primary base to accelerate both nations’ relationships. Undoubtedly, both states enjoy warm relations rooted in the centuries-old religious, cultural, and commercial links. The partnership under the visionary leaderships has grown over time and has remained one of the strongest alliances in the Islamic world. It was rightly defined by the late King Abdullah bin Abdelaziz al Saud as ‘brothers’. The intent to further strengthen the engagement is evident in the exceptional contemporary tenure of the Crown Prince of Saudi Arabia, His Excellency Muhammad bin Salman al Saud.

Since the 1960s, Pakistan has been collaborating in the security paradigm with Saudi Arabia and has pursuedsoft power diplomacy policy vis-à-vis promoting peace. Its support and facilitation for theKingdomare vital because it had an experienced military and political class. Sincethe1970s, the Saudi Kingdom has been experiencing  economic stability aligned withits oil wealth that requires a large labour force. A large Pakistani diaspora has been residing in Saudi Arabia and helping the country fulfilits requirements ofan efficient workforce.

From the 1970s, economicalignments between both states haveexceptionallybenefitted them. The Kingdom has assisted Pakistan with significantinvestment and financialassistance. In Present times, the partnership is contributing to the socio-economic development of these countries.Saudi Arabia is the biggest exporter of oil and petroleum products to Pakistan. For Pakistani goods and services, the Saudi market is one of the main markets.Pakistan’s exports to Saudi Arabia have been increased in recent times.Despite the Covid-19 pandemic restrictions, Pakistan’s exports to the Saudi Kingdom saw a major rise of almost 34%. Furthermore, in 2020, the bilateral trade between both states increased to $2.181 billion.According to the United Nations COMTRADEdatabase on international trade, Pakistan’s exports to Saudi Arabia were US$432.3 million during 2020.In this aspect, it can be anticipated that there would be an increase in the ratio of exports in the near future.

The Substantial Dynamics of Strategic and Security Partnership:

Saudi Arabia advances its ambition of expanding the ideological reachby maintaining a deep strategic relationship with Pakistan. Defence cooperation is another important element in strengthening the bilateral relations between both countries.Being a nuclear power, Pakistan has been seen as a powerful partner to address the strategic concerns of Saudi Arabia. The joint military drills and activities have paved the way for future cooperation in this domain. In this aspect, some examples of joint strategic and defence cooperation between Saudi Arabia and Pakistan are mentioned below:

The Saudi Government has taken well-structured policy ramifications to modernize its internal structure and play an active role in the international arena. Therefore, the Kingdom has introduced grand vision 2030 for inclusive socio-economic and security development. This includes three broader pillars mentioned below:

Opportunities for Pakistan Under Saudi Vision 2030:

Under this vision, Pakistan can work closely within Saudi Arabia’s integrated framework. The two countries are enriched in naturaland mineral resources. Therefore, investment and research in geophysics and other mining-related subjects will pay huge dividends in the long run. Moreover, the vision offers Pakistan an opportunity to enhance its manpower export to more skilled and professional levels. It will boost foreign remittances. The close partnership between Islamabad and Riyadh will foster cooperation within this grand vision.

The three-day visit of Pakistani PM Imran khan has been held in a time when the strategic partnership between two countries is being called on to deal with the important regional developments. The Saudi Crown Prince Muhammad bin Salman and PM Imran Khan held a discussion. During the meeting, expansion of economic activities and enhancing bilateral coordination in multiple sectors between the two brotherly countries were emphasized. The positive role of Pakistan and the Kingdom in resolving the issues facing by the Islamic nation and its endeavours for regional and international peace and security were also discussed.  Moreover, two important Memorandum of Understanding (MoU) were signed including, combating drug trafficking and financing energy, upgrading infrastructure, transportation, water, and communications projects.  Both countries have also agreed to establish a Higher Coordination Council that will help in assisting the programs and projects. The latest visit also paved the way for exploring various areas of cooperation in light of the Kingdom’s vision 2030.

Both countriesare also inclined towards making a viable political solution to the Yemen crisis. They have explicitly showed concern over the ballistic missiles and drone attacks by Houthi militias on Saudi Arabia, threatening the oil export’s security and the stability of energy supplies.Furthermore, both countries have been stressing the strongefforts by the Islamic world to fight extremism, reject sectarianism, and strive to achieve international peace and security. In this aspect,collective efforts to combat terrorism and Islamophobia are vital.

The brotherly relation between Saudi Arabia and Pakistan has been strengthened by the latest visit of Pakistan’s PM Imran khan. The historic partnership between the two states, forward-looking spirit, peaceful initiatives, and cooperation in a vast range of fields have resulted in a win-win situation. It can be anticipated that all areas, including trade, economics, investment, energy, energy, defence cooperation,the welfare of the overseas Pakistani diaspora,and job opportunities,would reinvigorate existing exceptional bilateral relations betweenboth countries.