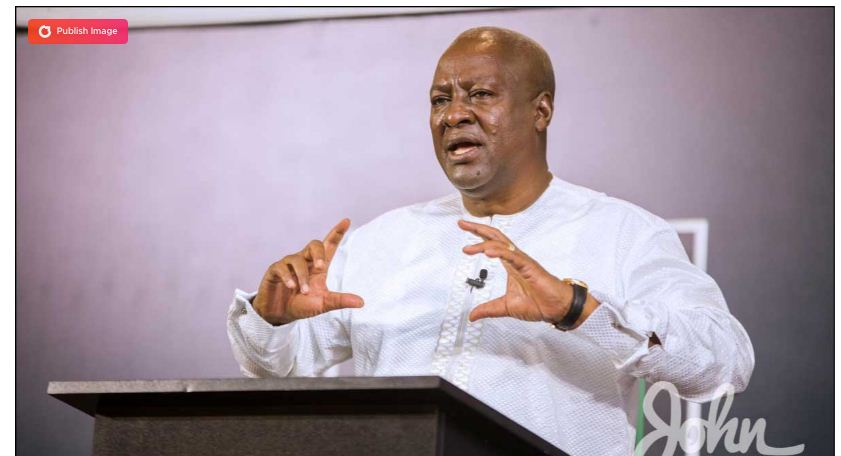 The Chairperson of the Commission, Moussa Faki Mahamat, has announced the appointment of H.E John Dramani Mahama, former President of the Republic of Ghana, as his High Representative to Somalia.

As the High Representative for Somalia’s political track, President Mahama will work with the Somali stakeholders, to reach a mutually acceptable compromise towards an all-encompassing resolution for the holding of Somali elections in the shortest possible time.

In fulfilling his mandate, the High Representative will be supported by the African Union Mission in Somalia (AMISOM), to ensure that the mediation efforts and the peace support operation work together seamlessly.

The Chairperson of the Commission calls on the Somali stakeholders to negotiate in good faith, and to put the interests of Somalia and the well-being of the Somali people above all else in the search for an inclusive settlement to the electoral crisis.

This should usher in a democratically elected government with the legitimacy and mandate to resolve the remaining outstanding political and constitutional issues that are posing a threat to the stability of the country and the region as a whole.

The Chairperson of the Commission also encourages all the Somali stakeholders and the international community to extend every support to the High Representative, who will arrive the country in the coming days.

Ambassador Abukar Arman, a former Somalia special envoy to the United States and a foreign policy analyst says there have previously been interventions from neighbors have not brought Somalia the promised peace.

It is clear that no Somali can pursue a political career in his own country without first getting Ethiopia’s blessings. Already, Ethiopia has installed a number of its staunch cohorts in the current government and (along with Kenya) has been handpicking virtually all of the new regional governors, mayors and so forth.

In October 2010, the African Union appointed Jerry John Rawlings as the AU High Representative for Somalia to “mobilize the continent and the rest of the international community to fully assume its responsibilities and contribute more actively to the quest for peace, security and reconciliation in Somalia.”

That however, Ambassador Arman says the former Ghana president and AU Special Representative for Somalia is now assuming his new post with significant diplomatic capital, mainly resulting from the credible work of his fellow countryman, former president, and Special Envoy to Somalia, Jerry John Rawlings.

“On the other hand, he would be carrying the hefty political burden that comes with the so-called African Solutions for African Problems and its cash-gulping record. The concept is taken hostage by African sloganeers and foreign elements eager to advance zero-sum interests,” he wrote me in an emailed message.

Make no mistake, Somalia is held in a nasty headlock by a neighbourhood tag-team unmistakably motivated by zero-sum objective. It is their so-called African solution (not so much of the extremist group al-Shabaab) that is setting the Horn on fire.

According to AFP news report, Mogadishu had been on edge since February, when President Mohamed Abdullahi Mohamed’s term ended before elections were held, and protesters took to the streets against his rule. But a resolution in April to extend his mandate by two years split the country’s fragile security forces along all-important clan lines.

Soldiers loyal to influential opposition leaders began pouring into the capital. The fighting drove tens of thousands of civilians from their homes and divided the city, with government forces losing some key neighborhoods to opposition units.

Under pressure to ease the tension, Mohamed abandoned his mandate extension and instructed his prime minister to arrange fresh elections and bring together rivals for talks. Indirect elections were supposed to have been held by February under a deal reached between the government and Somalia’s five regional states the previous September.

But that agreement collapsed as the president and the leaders of two states, Puntland and Jubaland, squabbled over the terms. Months of UN-backed talks failed to broker consensus between the feuding sides.

In early May, Mohamed re-launched talks with his opponents over the holding of fresh elections, and agreed to return to the terms of the September accord.

Prime Minister Mohamed Hussein Roble has invited the regional leaders to a round of negotiations on May 20 in the hope of resolving the protracted feud and charting a path to a vote. In the meanwhile, the international community has threatened sanctions if elections are not held soon.

Somalia remains the epicenter of global geopolitical and geo-economic competition. Some of the major ones are in a cut-throat competition that further complicates the Somalia conundrum. With its longest coastline, bordering Ethiopia to the west, Kenya to the southwest and the Gulf of Eden, Somalia has attracted many foreign countries to the region in East Africa.