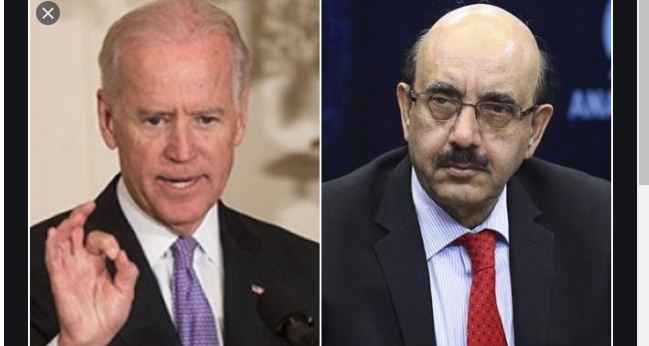 “The least the US can do is to ask India to cease and reverse illicit transfer of the Indian Hindu population to the Occupied Jammu and Kashmir (IOJK) and stop killing unarmed Kashmiris in the occupied territory,” the President said in an interview to a national periodical.

He asserted that Washington has to revise its brief on Kashmir. It thinks that 900,000 Indian military and para-military troops are fighting “terrorists” in Kashmir. But that is a false premise constructed by India to delude the world.

The US, he said, should call for an end to repression and restoration of civil liberties and fundamental freedoms in IOJK. Being promoter of the right to self-determination throughout the last century, the US should not stand in the way of Kashmiris’s freedom of choice for their political identity as envisaged and mandated by the relevant UN Security Council resolutions.

About the possible role of the United Nations, the state President said “the UN’s role on Kashmir is disappointing and the UN Secretary-General knows this fact. But his hands are tied. He can’t do much about the issue because the UN Security Council is not moving at all.

When asked about the prospects of capturing the world attention and the global media on the Kashmir conflict, Sardar Masood Khan said that before the world pays attention to Jammu and Kashmir, the political parties of Pakistan and Azad Kashmir themselves would have to focus on Kashmir because the world wants to see how much attention we ourselves pay to what we demand from them.

“Before the world refocuses its attention on Kashmir, the people and political parties of Pakistan and Azad Kashmir will have to do so. The world needs to first witness how intense we Kashmiris and Pakistan are. Their attention will be directly proportionate to our passion and endeavours,” he said.

On the lukewarm response to the Kashmir issue from the international community, President Masood said that we shouldn’t dismiss some successes out of hand.

These successes include uproar in the international media about India’s aggression in the IOJK and heightened discussion on the situation in IOJK in parliaments and civil society organizations.

AJK President said that the besieged and unarmed people of IOJK are giving blood for liberty every day. Under an unrelenting reign of terror by Indian occupation forces, they have not capitulated. As free citizens, we should do better than that.

Describing Kashmir liberation struggle as native, the state president said people of Indian occupied Jammu and Kashmir have been continuing the struggle on their own negating the Indian propaganda that the freedom movement is foreign-sponsored. = DNA