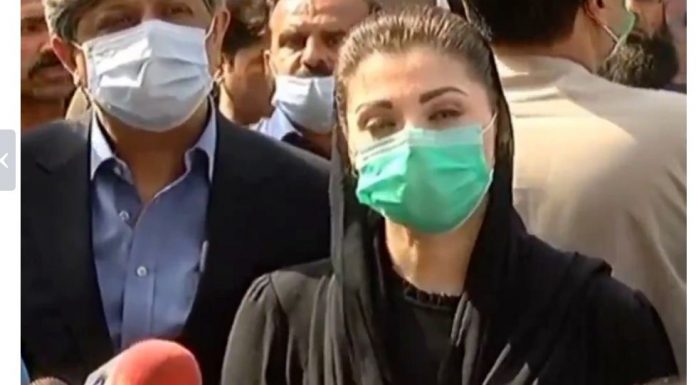 ISLAMABAD, MAR 27 – PML-N Vice President Maryam Nawaz alleged on Saturday that PPP co-chairman Asif Ali Zardari had offered a deal to the PML-N in a meeting of the Pakistan Democratic Movement (PDM), purportedly backed by the establishment, of regime change in Punjab.

Maryam made the allegation while speaking to the media outside the Lahore High Court, where she had gone to submit her bail bond of Rs1 million in a case concerning alleged illegal acquisition of land in Jati Umra. She is on interim bail till April 12 in the case.

She said Zardari had “made this offer inside the PDM that if PML-N wants, then we [PPP], because selectors also want this, want a [regime change] in Punjab”.

“They said if the PML-N and PDM accept, then we can bring change in Punjab though a vote of no confidence [against the Punjab chief minister] and make [Chaudhry] Pervaiz Elahi or someone else the chief minister.”

She went on to say that PML-N supremo Nawaz Sharif had rejected the offer and given a “clear answer” that he would not sacrifice his principles or work together with the “selectors” to attain political power.

“His entire stance was based on our narrative that you should remain in the limits and boundaries of the law and Constitution, and don’t interfere in politics,” she said.

She said Nawaz refused to leave his principles in exchange for political power.

Maryam rubbished a question when asked whether the slogan of aik Zardari sab pe bhari (one Zardari outweighs all) had prevailed yet again, saying: “If I today too sacrifice my principles and Mian Sahab sacrifices his principles then we can outweigh the whole of Pakistan.”

“I think it is a moment of shame,” said Maryam, adding that everyone knew how to throw around their political weight but “to walk on principles and be steadfast is the the way to go and the nation is watching.”

Maryam lashed out at the PPP’s decision to submit Yousuf Raza Gilani’s nomination for the leader of the opposition in the Senate.

Gilani was successful in the bid — with 30 votes in his support compared to 17 for the PML-N-backed candidate Azam Nazeer Tarar — and was confirmed as the leader of the opposition in a notification issued by the Senate Secretariat on Friday.

She said that while she would wait for PDM chief Fazlur Rehman’s stance on the issue, she herself was very “saddened by this — despite having an idea and having all understanding — that you [PPP] for a small position, dealt a very big loss to a democratic cause, democracy and the struggle for the supremacy of the people’s rights”.

She railed against the PPP and said in reality “this loss has been dealt to you [PPP] the most” since now the people were watching every single move and knew where everyone’s true affiliations lay.

“This is not the defeat of the parties involved in the PDM including the PML-N. I understand this is the defeat of those people who sacrificed their principles for a small position.”

Maryam said the office of the leader of the opposition in the Senate held no weight, was not an important position and “if the PML-N had gotten this position then it’s not as if we were making the government”.

She said the PPP, for a small and temporary benefit, had approached the Balochistan Awami Party (BAP) for votes. “That BAP which doesn’t support anyone without permission from its baap (father)?”

‘Could have asked Nawaz’

Maryam said if the PPP “wanted this position and wanted it so badly then you should’ve asked Nawaz Sharif and he would’ve given it — like he had provided support for Gilani in the Senate elections and for the Senate chairman”.

She alleged that the PML-N candidate, Tarar, had received a call from Senate Chairman Sadiq Sanjrani six days ago and he [Tarar] had also been offered the help of the BAP but he refused to betray the PML-N, its stance and its struggle.

Maryam pointed out that for the first time in Pakistan’s history “government members are electing or ‘selecting’ the leader of the opposition. Have you seen this before?”

“The opposition is the PML-N, JUI-F (Jamiat Ulema-i-Islam-Fazl) and other parties and they voted for PML-N as was decided in the PDM. So I’ve seen for the first time that the leader of the opposition [in the Senate] is being made after meeting with government and officials.”

Maryam said, alluding to the PPP, that if it thought people were naive or that it could make excuses then “I think you can may be a fool yourself but you can’t fool the people”.

“If you have to be obedient and be selected then you should follow [Prime Minister] Imran Khan who does that with great stubbornness and [despite] being exposed, [continues to] follow the words of the ‘father’.

“This can’t happen that sometimes [you are] in the opposition and sometimes in the government, you should openly admit that you listened to and accepted the orders of the ‘father’.”

Maryam claimed the PPP had lost the support of the people and and it no longer trusted its own ability to gain power from the people.

She said the PPP thought that there was no path available for it to attain political power except for being “selected”, adding that now everyone could see who stood where and what their real positions were.

“The PML-N, Maulana (Fazlur Rehman) and other parties involved in the PDM — who are standing on principle — are enough to give a strong time to the government.

Maryam also addressed a separate question and said the sentence given to former president General (r) Pervez Musharraf had forever set an example.

She said the sentence of the death penalty against him was “not just a decision against Pervez Musharraf but a decision against every person in the past who tried to attack democracy, trample on the power of the vote and this is also a great deterrence for future leaders who have such intentions”.