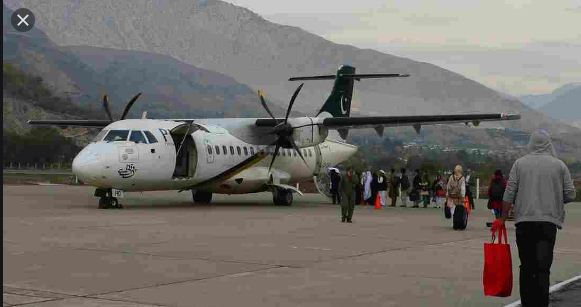 Before flying, the official cut the cake to celebrate the inauguration.

There will be two flights to and from Saidu Sharif Airport to Islamabad and Lahore in a week.
During the militancy period from 2007-2009, tourism was almost destroyed in the valley. However, security forces cleaned the valley from the militants and restored peace in the valley.

The people of Swat Valley and Xinjiang have centuries of old cultural and business ties, as they are geographically close to each other.

Over the history, the people of Swat would travel through Gilgit-Baltistan to Xinjiang, China to bring goods and people of both regions had entered into marital relations, according to local historians.

Currently, Mingora City of Swat is known for the markets of Chinese goods. The business continues to prevail via land route and sea.

In recent interactions with Gwadar Pro, the business community of Mingora had demanded the government to start direct flights from Swat Airport to China to reduce travel expenses and time. According to officials in Aviation, soon the airport would be open to international flights including to China.