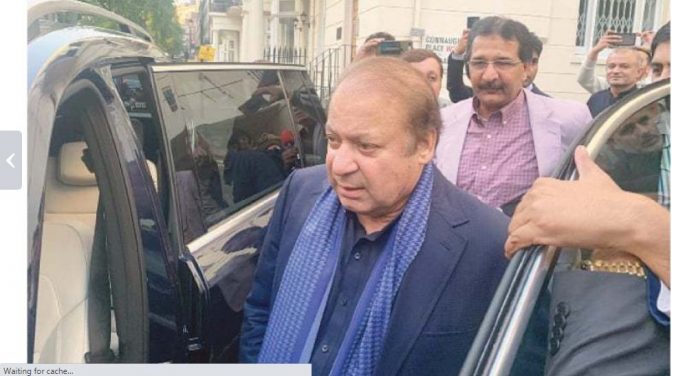 ISLAMABAD, MAR 24 – The government has decided not to renew the passport of former prime minister and PML-N supremo Nawaz Sharif who is currently absconding in London. However, the ministry of interior has offered him special documents to return to the country, it emerged on Wednesday.

The interior ministry stated this in response to a query by the Ministry of Foreign Affairs made on February 19 regarding the “request for issuance of new diplomatic passport by the former prime minister Muhammad Nawaz Sharif”.

Nawaz’s passport had expired in February of this year. Interior Minis­ter Sheikh Rashid Ahmed had already announced in January that the PML-N supremo’s passport would not be renewed as per instructions from Prime Minister Imran Khan.

The letter by the Ministry of Interior to the Ministry of Foreign Affairs, a copy of which is available with Dawn, turned down the request and stated that the renewal of Nawaz Sharif’s passport would not be processed by the relevant authorities.

The interior ministry stated that in order to return to Pakistan, Nawaz Sharif may apply for an Emergency Travel Document (ETD) from the Pakistan High Commission in UK, and “the same may be issued once he produces prior bookings of travel to Pakistan through PIA (Pakistan International Airlines) only.”

The interior ministry said that the issuance of a passport was not a fundamental right of any citizen.

“It being a property of federal government may only be issued once the applicant satisfies the relevant authorities regarding the bonafide of the application. A citizen’s right to travel abroad extinguishes once declared a fugitive of law.”

The letter by the interior ministry has been forwarded to Muhammad Ayub, Deputy High Commissioner, London.

The interior ministry said that the application for renewal of passport by Nawaz is “misconceived”, adding that Nawaz was declared a proclaimed offender by the Islamabad High Court (IHC) in a criminal appeal titled “Mian Nawaz Vs NAB”, as well as Toshakhana Reference by an accountability court in Islamabad and declared absconder in reference in case of Mir Shakeelur Rehman by an accountability court in Lahore.

The interior ministry also added that under the circumstances, Nawaz is required to return to Pakistan and appear before the relevant courts to face charges.

“He being a fugitive of law and absconder cannot seek any further relief unless he surrenders before the courts in Pakistan,” the letter said.

The letter pointed out that the IHC had granted eight-week bail to Nawaz on October 29, 2019, in the form of suspension of sentence, which was not extended by the Punjab government, as he failed to put forth reasonable cause as to why it should be extended for his medical treatment.

The interior ministry stated that Nawaz was now required to serve the remainder of his sentence at Kot Lakhpat jail Lahore.

“Yet, rather than obeying the dictates of the court and abiding by the conditions precedent in the bail granting order, he fled the country to avoid prosecution,” the letter added.

The letter also mentioned the list of cases pending against Nawaz in various courts in which he is required to appear and defend himself. The four cases are the Toshakhana reference and three criminal appeals pending before the IHC.

The foreign ministry has been asked by the interior ministry to respond to Nawaz through the Pakistan High Commission in London.

At the same time, the government has anticipated that the former prime minister is less likely to return and avail the ETD offer, and in a separate letter to the foreign office, the interior ministry has forwarded a form to be filled and signed by Nawaz regarding his current health status.

Referring to the order of the Lahore High Court (LHC) dated November 16, 2019 — in which it allowed Nawaz to travel abroad for four weeks for medical treatment, saying the duration could be extended based on medical reports — the interior ministry said that more information related to Nawaz’s health was needed.

The ministry’s letter regarding Nawaz’s health contains seven queries to be filled by the former prime minister including current diagnosis by medical doctors, name and address of doctors under whom he was receiving medical treatment, copies of all medical reports including tests undertaken in the UK with results of the tests, details of treatment (if any) received in the UK hospitals, details of ongoing treatment (if any), details of payment made for medical treatment in the UK and dates of visits and consultations made with the doctors in the UK.

The interior ministry informed the Foreign Office that Nawaz needed to sign the information, giving consent to the Pakistan High Commission in London, and the information will be forwarded to the LHC.