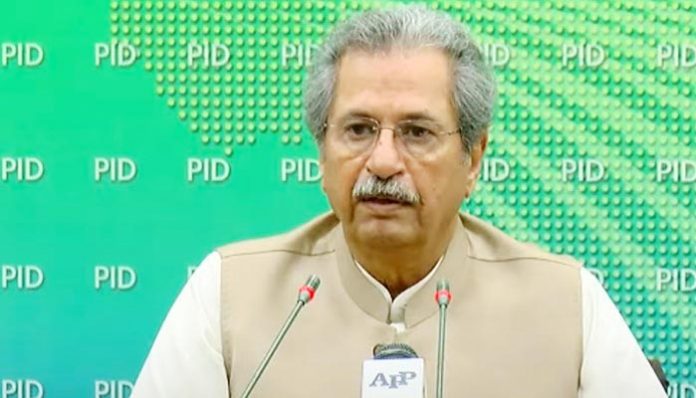 ISLAMABAD,MARCH 24 : An important meeting of education and health ministers is underway at the National Command and Operation Centre (NCOC) to decide on the closure of schools amid an alarming rise of coronavirus cases in the country.

Federal Minister for Education and Professional Training Shafqat Mehmood on Sunday had announced that all the education and health ministers would meet on March 24 at the NCOC to mull the pandemic situation and decide about the reopening or further closure of educational institutions.

Taking to his Twitter account, the federal minister had reminded the masses that the third wave of the coronavirus is serious, therefore, it requires careful review.

“All education/health ministers will meet Wednesday, March 24, at the NCOC to take a decision regarding opening or further closure of educational institutions,” the minister wrote.

“The health of students, teachers, [and staff is of] primary consideration.”

In a separate statement on Monday, Mehmood said that he was not in favour of shutting down educational institutes but the NCOC believed that there’s a high risk of coronavirus in schools.

“50 million children are linked with education and if someone got infected, the disease would spread,” he said.

It is pertinent to note that schools, colleges and universities were allowed to resume regular classes from March 1 but the Sindh government did not follow suit saying the situation has not improved.

On March 10, the federal government had announced a two-week Spring Break in Islamabad, Peshawar and seven Punjab cities where the positivity was high and imposed restrictions to control the spread.

The health officials have warned that the UK variant, which has wreaked havoc in Punjab and the federal capital, spreads faster and is more deadly.

In view of a surge in coronavirus cases in the country, the NCOC on Monday issued renewed standard operating procedures (SOPs) to contain the virus, saying that these would be implemented with immediate effect.

As per the new guidelines, all businesses will only be allowed to operate five days a week, while all commercial activities will be closed by 8:00pm in areas with a positivity ratio greater than 8%.

The forum expressed grave concern over the current COVID-19 situation in the country and unanimously agreed to implement some high impact interventions in cities and districts with a high positivity ratio.