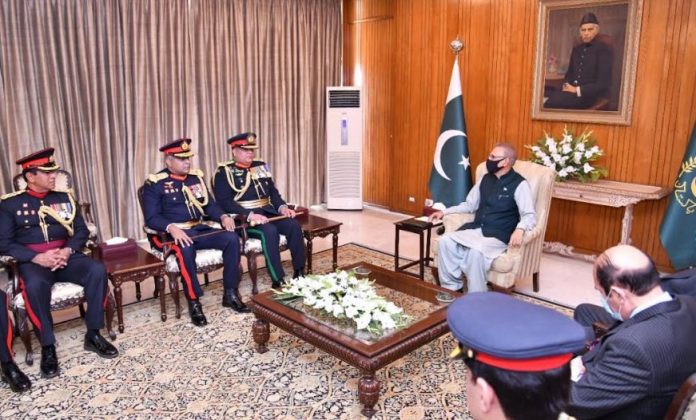 ISLAMABAD, MAR 19 (DNA) – President Arif Alvi has said that Pakistan highly values its relations with Sri Lanka as both countries have unanimity of opinion on regional and international issues and enjoy excellent relations in all areas of mutual interests.

The President underlined the need for further enhancing economic, cultural and defence relations between the two countries. He made these remarks while talking to the visiting Chief of Defence Staff and Commander of the Sri Lankan Army, General Shavendra Silva, who called on him, at Aiwan-e-Sadr, today.

The President said that Pakistan was attractive destination for the Buddhist tourists and people from Sri Lanka needed to be encouraged to visit the religious and scenic sites in Pakistan. He briefed the visiting dignitary about the successes achieved by Pakistan against the war on terror.

He also highlighted the ongoing atrocities and human rights violations by Indian Security Forces in the Illegally Indian Occupied Jammu & Kashmir. The President urged that International community should play a positive role to resolve the Kashmir issue in accordance with UN Security Council Resolutions.

The Chief of Defence Staff & Commander of Sri Lankan Army said that Pakistan was a close and dearest friend and his country wanted to further improve bilateral ties with Pakistan.

He said that the recent visit of the Prime Minister of Pakistan Mr. Imran Khan to Sri Lanka would boost bilateral relations.  He deeply thanked Pakistan for its support which stood by Sri Lanka in difficult times.