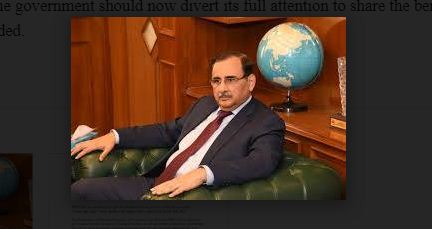 KARACHI, MAR 13 – The Federation of Pakistan Chambers of Commerce and Industry (FPCCI) has asked the government to take measures to bring down the cost of agriculture production, prioritizing agri sector in its economic planning to ensure food security through enhanced per acre yield.

Due to lower produce of three major crops the import of wheat has jumped to $909 million, sugar $126 million and cotton $913 million during Jul-Feb 2021. The cumulative import bill of the three agriculture products in the eight months touched to the figure of almost $2 billion, lifting the ever-increasing trade deficit further, amidst alarming decline in cotton production by 34%, observed Mian Anjum Nisar.

According to the figures, till Feb 2021 cotton arrivals in Punjab are recorded at 3.5 million, while Sindh generated just 2.1 million which is 1.5 million bales less in Punjab and 38.52 percent less in Sindh respectively as compared to the last year’s production.

In these circumstances, he suggested the government to reduce cost of production through direct support to farmers in purchase of machinery, fertilisers, pesticides and other inputs, while infrastructure should also be developed to ensure farm-to-market access. The government should formulate sustainable agriculture policy to ensure food security in the country, he added.

Pakistan’s food security is dependent on production of essential crops that are providing basic food and input for industrial production, Anjum Nisar added. However, the performance of agriculture sector presently does not guarantee self-sufficiency.

FPCCI’s ruling group chief said that negligence of agriculture could lead the country towards severe food security while shortage of essential food items would increase inflation. “Seed is the basic input for agriculture sector and has an imperative role in enhancing agriculture productivity. The world has now focused on the use of certified seed for enhancing agriculture productivity owing to its better profitability coupled with the application of internationally acceptable quality parameters,” he pointed out.

He said that technology and farm mechanization can accelerate the growth of agriculture sector. Since all the economic indicators are moving in positive direction the government should now divert its full attention to share the benefits of this positive movement in economic spheres with the public, he added.