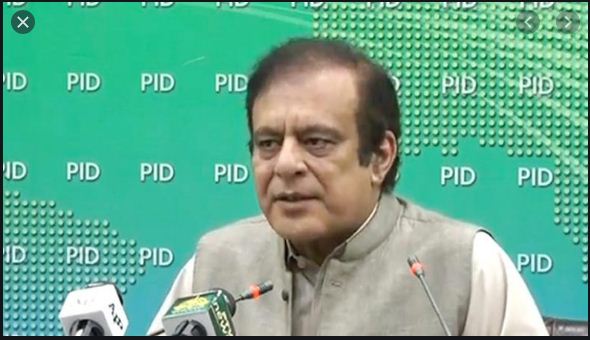 ISLAMABAD, MAR 12 (DNA) – The federal information minister Senator Shibli Faraz said Friday, as he talked to the media following the election of government-backed Sadiq Sanjrani as Senate chairman, that empowering Prime Minister Imran Khan is crucial to ensure the supremacy of law and order.

Shibli Faraz asserted the politics of joint opposition alliance Pakistan Democratic Movement (PDM) is now dead and buried and since the country cannot afford to regress now, it is necessary that we support the prime minister.

The federal minister said their nominated Senate chairman candidate Sanjrani has won today even when the opposition perpetrated the propaganda of spy cameras installed in the upper house.

What they did in the National Assembly, happened to them in Senate, he said. Those who want progress for the country have won, Faraz said, adding that the PM with the sincerest intentions for the prosperity for Pakistan was blessed with divine support.

The presiding officer in charge of Senate chairman polls Friday has convened Sadiq Sanjrani to take oath as Senate chairman for the second time but house members from the opposition alliance cause commotion over wasted votes.

As the oath-taking took place, the house experienced a row raised by Pakistan Peoples Party’s Farooq H Naik who argued against discarding seven votes which could have meant a win for joint opposition alliance’s candidate Yousuf Raza Gilani. = DNA