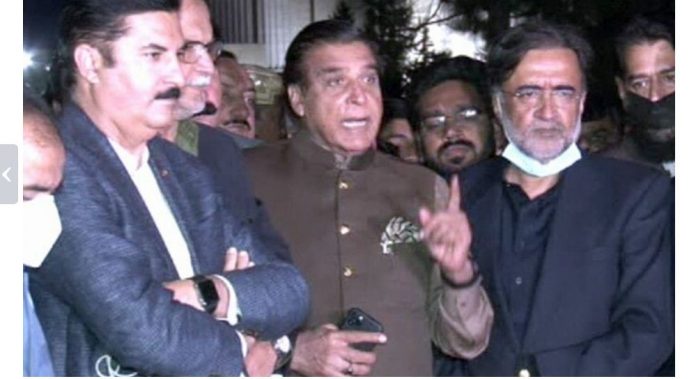 ISLAMABAD, MAR 12 – Members of the opposition on Friday blasted the result of the Senate chairman election which saw the ruling PTI-backed Sadiq Sanjrani defeat PPP’s Yousuf Raza Gilani — the Pakistan Democratic Movement’s joint candidate — and vowed to challenge the result in the courts.

PPP leaders Raja Pervez Ashraf and Qamar Zaman Kaira along with senior PML-N leader Ahsan Iqbal addressed a press conference in Islamabad as they criticised the Senate chairman election during which seven votes cast in favour of Gilani were rejected.

Ashraf alleged that the “unconstitutional and unlawful” manner in which Gilani’s majority was defeated and the decision was given against him was “worthy of condemnation”. He alleged that those who had talked about the “sanctity and importance” of the vote had instead planted cameras to affect the polling process — a reference to the “spy cameras” allegedly found near the polling booth in the Senate earlier in the day.

“I think that when we go to the courts and they analyse the ballot papers […] Yousuf Raza Gilani will be successful,” he added.

Iqbal, meanwhile, also said the opposition would take the matter to the courts “and we expect from the court that it will correct this attack on the Consitution, the law and the vote”.

Both leaders sharply criticised the process through which Gilani’s seven votes were rejected and Ashraf claimed that the PDM had actually won, while the “government candidate has badly failed”. He questioned why Sanjrani had occupied the seat despite being in the minority.

He added that the use of such tactics by the government was a sign that “its days are numbered”. “A great joke has been had with democracy. We and the PDM reject this election,” said Ashraf.

Iqbal said the seven rejected votes stood valid according to a decision of the Supreme Court (SC) he quoted.

“The question of the validity or otherwise of the ballot papers can only be determined by ascertaining the intention of the voters and in that respect, the manner of affixing the stamp is material.

“If the mark or stamp is affixed upon the name of the candidate instead of their symbol, there cannot be any hesitation to maintain that the voter had in fact shown his consent to cast vote in [the candidate’s] favour.”

He maintained that other decisions of the SC also held that the intent of the voter needed to be considered, saying there were “dozens of decisions of the SC, the high court and ECP (Election Commission of Pakistan) that [such a] vote is valid”.

“It is as clear as the rising of the sun that this rigging was done by forcefully invalidating seven votes to turn the defeat of the government into victory,” the PML-N leader alleged.

PPP leader and Sindh Education Minister Saeed Ghani, meanwhile, citing a banner stating the instructions for casting vote in the Senate hall, said that according to it the stamp was to be placed inside the box containing the favoured candidate’s name.

He also claimed that the senate secretary had told him and PPP leaders Farooq Naek and Sherry Rehman “that the name can also be stamped”.

The ranks of the government, meanwhile, were abuzz with celebration in the wake of Sanjrani’s victory.

Speaking to media just after Sanjrani was declared the winner, Minister for Information Shibli Faraz said his victory showed that the time had come for the PDM’s “political burial”.

“I want to congratulate the people of Pakistan because the dark forces have been defeated,” he said.

Senator Faisal Javed added that not only the people of Pakistan, but “their own people rejected them”. He said Sanjran’s win was a win for all of Balochistan.