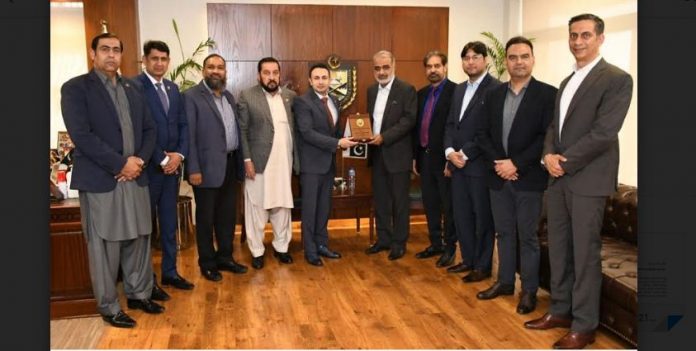 ISLAMABAD, MAR 9 (DNA) – Tariq Mehboob, Chairman, Chainstore Association of Pakistan (CAP) along with a delegation visited Islamabad Chamber of Commerce & Industry and held a meeting with Sardar Yasir Ilyas Khan President and his team to discuss options for making collaborative efforts to resolve the key issues of the business community and push the government for formulating more conducive business and economic policies. Asfandyar Farrukh Senior Vice Chairman, Members Irfan Iqbal Sheikh and Mardan Ali Zaidi, Shafiq Ahmed Secretary General CAP, and others were in the delegation.

The CAP delegation informed that they have held productive meetings with FBR and FBR has reduced the WHT from 4.5 percent and 2.5 percent to 0.25 percent and turnover tax from 1.5% to 0.25 percent for retailers, wholesalers, distributors, and dealers of FMCG, sugar, cement, edible oils and fertilizer sectors, which would provide great relief to the business community of these sectors and help in accelerating the pace of business activities.

Addressing the delegation, Sardar Yasir Ilyas Khan, President, Islamabad Chamber of Commerce and Industry welcomed the positive decision of the Federal Government, especially FBR, and hoped that the tax department would make reductions in other high taxes that would bring down the cost of doing business and help in generating more economic activities.

Sardar Yasir Ilyas Khan said that high tax rates in Pakistan and complicated tax system were the major hurdles in promoting business and investment activities up to the real potential of the country and emphasized that FBR should rationalize tax rates in consultation with chambers of commerce & Industry and other trade bodies. He said that tax-to-GDP ratio was quite low and one of its main reasons was high tax rates that were encouraging tax evasion in the country. Therefore, rationalization of taxes was the way forward that would help in broadening the tax base and improving the overall tax revenue of the country as with low tax rates, more people would come into the documented economy.

Both sides also stressed that the government should focus on formulating a new tax strategy to give a clear direction to the business sector so that businessmen could make plans for business expansions and make new investments with more confidence.