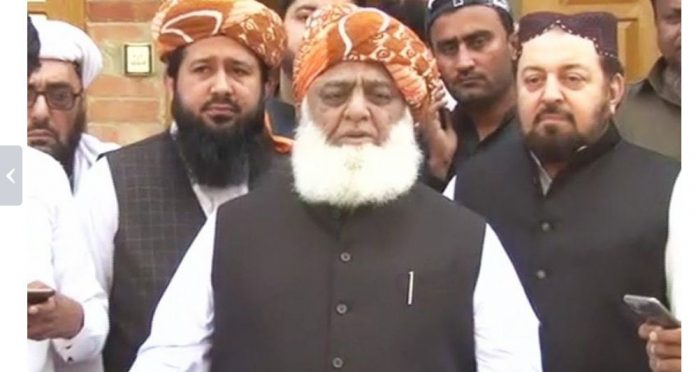 Speaking to the media in Sukkur shortly after the NA session concluded, Rehman said the Constitution clearly stated that the president can summon a session “if he believes that the prime minister does not hold majority”.

“Here, the session was called over a summary by the fake prime minister. Summary is not involved in summoning such sessions, all of this is a drama,” said the JUI-F chief, who is not part of the NA. “We don’t accept today’s Assembly session, nor do we accept the confidence vote.

“This was not a confidence vote. We know which agencies watched the members of the assembly the entire night. [We know] who knocked on the doors of each member to ensure they were present.”

Rehman, who is also the chief of the opposition alliance Pakistan Democratic Movement (PDM), alleged that MNAs were “forcefully” made to vote for Prime Minister Imran. He urged the premier to “be courageous and ask the public to cast a vote of confidence [by] conducting a new election”.

Earlier today, Prime Minister Imran secured 178 votes — six more than required — to win the vote of confidence from the NA.

Announcing the result, NA Speaker Asad Qaiser said that three years ago, Prime Minister Imran had been elected to the post with 176 votes. “Today, he has secured 178 votes,” he said.

The session was boycotted by the PDM.