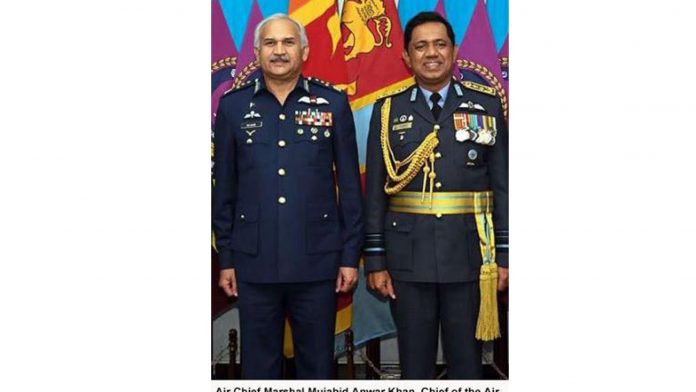 The Air Chief also attended SLAF’s 70th anniversary Parade as Guest of Honour at SLAF Base, Katunayke. The Air Chief extended his felicitations to Sri Lankan Force on completing 70 years of glorious service to the nation. He also congratulated No 5 Fighter Squadron and No 6 Helicopter Squadron of the SLAF on award of President’s Colours.

Later in the day, The Air Chief attended launching ceremony of a book titled Iron Wings of Glory.  President of Sri Lanka H.E Gotabaya Rajapaksa presented a copy of the book to Air Chief Marshal Mujahid Anwar Khan. The book relates to the evolution of Air Power in the context of SLAF in Indian Ocean Region and achievements of SLAF during the fight against terrorists. The Air Chief interacted with several senior civil and military dignitaries at the occasion, as well.=DNA